by Bill Thomas _ Photo by Don Kindred
A brief look into the future.
It’s November 1, 2007. Last week, the second phase of the San Clemente Coastal Trail was completed. Not necessarily a new route, the old one was used since the town was founded in the ‘20s. The Trail evolved as a result of “rites of passage,” the rights of trains to move north and southward, versus the rights of citizens and visitors to cross the railroad tracks to reach the beach and ocean. It’s the result of a groundswell of citizen opposition to a concrete mini-freeway, which would have huddled alongside fenced tracks to form a corridor through San Clemente’s fragile beach shelf and bluffs. It’s the result of a local citizen’s panel creating a trail design addressing the safety issues, the environment, and concerns of railroad officials and citizen users. It’s the result of three activists and two City staffers diligently enlisting the aid of political figures and multi-government staffers to reach their goal. It’s a result of five million dollars in funding growing to ten million. It’s the result of tact, trust, and tenacity. 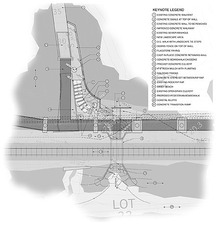