Who Put the “POW” In Kung Pao? by Maggie Zeibak
Manager Lawrence Wong with owners Jack & Nancy Cheng.For decades America has had a passion for Chinese food. When the craving strikes, we simply rush out to dine, or pick up the phone to order take-out. We all have our favorite dishes and preferences of fried or steamed rice, but preparation varies from restaurant to restaurant. Perfecting the art of offering a varied menu of hot, sizzling dishes is the spacious New Mandarin Garden tucked away in the Old City Plaza.
Owner, Jack Cheng, bought the restaurant from a friend 19-years-ago, but hadn’t any idea that San Clemente would grow the way it has. “I didn’t know it was so nice and I am very lucky to be here. When I first took over I decided to remodel and paint the place in softer colors. I changed the menu to reflect a blending of Cantonese and Szechuan flavors which appeal more to American tastes. Cantonese cooking is not spicy and most of my customers like spicy dishes, so I add hot peppers to create more of a unique Szechuan-region style. You can spot those dishes on the menu by the chile pepper drawing next to the item. We’re a family-operated business and I have nieces, nephews and cousins working here and my cook, Charlie Chen, has been preparing meals for over 18 years. Often, we cater corporate parties, sometimes for over 100 people – just tell us what you’d like.” 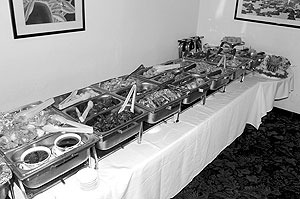