A Man of Goodwill - Frank Flegal by Joe Moore
LBJ with back to camera is shaking hands with a young Frank Flegal. 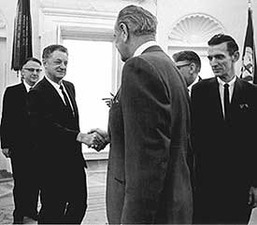 One hundred years ago a man by the name of Dr. Edgar J. Helms began an organization that would help tens of millions get through life with a little more - more dignity, more essentials, more employment and more help. Helms began Goodwill Industries.
Thirty-odd years after he began, another man would be brought aboard that would help shape two of the California branches of that organization. That man is San Clemente’s own Frank Flegal.
At 92-years-old, Flegal still speaks with tremendous pride and dedication about the organization he helped shape. A modest man himself, Flegal has shaken hands with such notables as Former L.A. Mayor Tom Bradley, and former Presidents Ronald Reagan and Lyndon Johnson.
Flegal began his career with Goodwill during the Great Depression. He had a degree from UC Berkeley and said as he graduated, “I realized that nobody was lining up to hire me.” His father was the director of the San Francisco office then, but he knew of the growing need of another full branch Goodwill in Oakland. There had been the beginnings of a store open half time, but the need was even greater in 1933. Flegal stated, “There were so many people in such desperate circumstances.”
The elder Flegal made a deal with his son that if he stuck it out for a full year he would hire him to assist in running the Oakland office. Flegal said, “So I stayed my first year and after that I did exactly what I wanted to do; which was to stay another 42 years.” In 1949 Frank Flegal’s father retired and he was named executive director of Oakland.
Frank & Helen's 67th Anniversary. 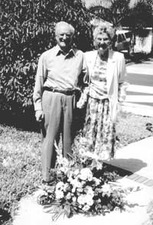 Recalling the time he said, “In those days you set-up to repair or refurbish everything that came in, because you didn’t get very much that was useable as it came to you.” Flegal recounted that in the beginning business was impossibly tough. He said, “Imagine an organization that operates with the poorest materials (discards from your home), with the poorest set of employees (the disabled or disadvantaged people that nobody wanted to employ) and sell to a market that is the lowest economically deprived [group] and then try to make a profit.”
Many things changed during the forty plus years Flegal was with the organization. When asked about the largest change, Flegal said, “The professionalism of Goodwill’s staff has increased tremendously”. He related that by the time he retired as CEO of L.A. he had an employee payroll of well over a thousand. That included specialists like a social worker, a full time nurse, a part time doctor, two occupational therapists and a bank of professionally seasoned executives with professional degrees, among others. A far cry from the early days where according to Flegal, “90% of the executives were Methodist Ministers.”
When asked how he came to Southern California, he states that the Los Angeles Board of Directors had been trying to secure a CEO for more than a year, and had approached him once before offering the position. After a time they again flew Flegal and his wife to Los Angeles, and after “wining and dining” them all day, left them in a room by themselves at a board member’s home for, “well over an hour”. One of the board members finally came to see them and told Flegal ‘we really want you, what will it take?’ So in 1955 Flegal agreed to move to Pasadena, keeping the Los Angeles unit as the flagship of Goodwill’s worldwide operation for another 22 years.
George Kessinger, CEO of Goodwill Industries Awards Frank Flegal with the 'Frank and Helen Flegal Fund' at the 100th Anniversary of Goodwill held in Milwaukee, Wisconsin. 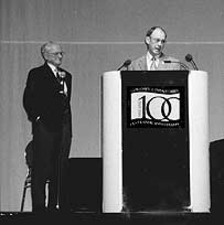 Flegal even met Helms on a couple occasions, once at Oakland and again, at one of the conventions. “He was a very impressive person,” Flegal stated, “and we haven’t had anybody in the movement since that begins to approach his record for influencing substantial gifts.” Referring to Helms’ compelling nature he said, “he even persuaded a group of musicians from one of the Boston professional music societies to come down to Goodwill and teach night classes in music.”
Frank retired to San Clemente in the ‘70s with his wife of 67 years, Helen. Helen, who turns 90 this August, is affectionately called “Grandma Flegal” and is best known for driving around town in her 1957 T-Bird. She recounts her own story about the first time she went to a national convention for Goodwill in a crocheted dress her mother hand-knitted for her. Someone came up to her and exclaimed, “Oh, you got that dress from Goodwill!” When Helen protested and told the person her mother handmade it, the person replied, “No, I can see it’s from Goodwill, it’s full of holes.”
The Flegal’s service toward others is unceasing. They have been just as active in their churches and were counselors in the youth ministry for many years. In fact, while this reporter was in Mexicali on a mission trip, one of the youth ministers from Glendale, now in his late 40s, asked my wife and I if we knew the Flegal’s. When we replied we did, he told us, “Give them my best, they were my counselors when I was young. They’re the reason I went into ministry.”
Flegal himself has earned a great deal of praise from his former organization. He still sends a note to each new director on their first anniversary along with a $25 contribution to their chapter. He has done this since he retired. Yet he was surprised when the organization recognized his lifetime efforts at the centennial celebration. They honored them by establishing the Frank and Helen Flegal Fund. According to Dave Barringer, VP of Marketing and Communications for Goodwill Industries International, this “will help new execs travel to training and national meetings in their first year. The new fund was established through conversations between me and our CEO, George Kessinger, a good friend of the Flegal’s. He wanted to do something for Frank and Helen in tune with our Centennial, and our renewed sense our Centennial, and our renewed sense of Goodwill’s family over the years, exemplified so well by Frank and his letters to new CEOs.”
An honor most befitting a couple who have spent their entire life caring for others.
People, Local History san clementean