Hello Dolly! ...Sadell, That Is by Joe Moore
Dolly at the Cabrillo Plathouse 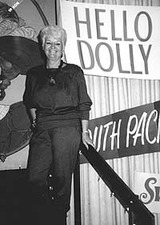 She doesn’t have a star on Hollywood’s Walk of Fame, but she should. Dolly Sadell has contributed as much to the arts as many on that walkway. She has written, produced and directed more than fifteen different musical revues. Not just on film or the big stage. She has created them for country clubs, community fundraisers, church events, etc. “When I was a little girl I’d go out with my mother. She would play the piano and I would sing and dance for children’s homes, elderly homes and hospitals throughout Philadelphia,” says Sadell.
Ask Dolly if she was destined to be in the arts and she’ll laugh and tell you how her parents met, “Mother…was playing a classical piece on the piano and my father walked by her window, heard the piece and knew it. He pulled out his violin and started playing with her so they played music together before they ever even saw each other. And when they met, that was it.” Sadell, herself, began her show biz training at a tender age. She was enrolled in ballet, tap dance and gymnastics from the time she was four-years-old, until her father became seriously ill when she was13.
Dolly is well known to the patrons and workers of Cabrillo Playhouse. She has donated much of her time to the playhouse for more than 20 years. “First I volunteered at the box office. I guess I
Dolly and Lawrance Welk in 1974 at
Bob Hope Classic 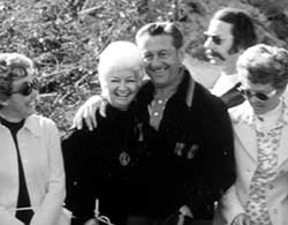 started about 1979-1980…I started to do finances and work on the sets. Then I became ‘back office manager’ and they asked me to be the Volunteer Coordinator. I was in charge of all the activities that happened in front of the stage including ushers, box office, refreshments, and the like.”
Sadell also helped put on several fundraisers for the playhouse that included BBQ’s and fashion shows. “We did a cocktail party that featured Tex Beneke who had taken over Glenn Miller’s Orchestra when [Miller] died, and he was the greatest gentleman. It was a tremendous success.” Dolly also helped coordinate another cocktail party with Alice Netzen where everyone dressed up as their favorite character. Benefactors showed up dressed as such varied talents as Mae West and Miss Piggy. The playhouse was so appreciative of the effort and result that they sent Sadell and Netzen on a cruise.
In 1999, Sadell was honored for her long years of commitment, being awarded a Lifetime Member of the Cabrillo Playhouse. “I worked [there] for over twenty years and I enjoyed every minute of it. I met and made such wonderful friends - lifetime friends.”
Dolly credits much of her enjoyment of the stage to the fact that she has been blessed with a good imagination, “I’ve just always used the gifts God gave me. I also worked at Sebastian’s for a year and met lots of lovely people there including Kay Ballard and Doris Day…I’ve had a very full and rich life.”
Sadell is also a skillful businessperson. She comments that at age 12 she worked as a self-taught hairstylist. Her father set her up with all the necessary equipment in their basement. “Back then I got a dollar a head which was big money,” she muses. As a young lady, she also took care of
Dolly with Tex Beneke at a fund raiser for the Cabrillo Playhouse
her father’s books. Then she partnered with her husband, Walter, for many years in their business.
The couple moved to San Clemente in 1975 when Dolly’s husband began having health problems. They merged their business with a major company and retired. When asked about all the changes she has seen in her 28 years as a resident in San Clemente, she recounts how all the hills were barren of houses. “ But I have so many friends on those hills now, I am glad to see all those homes,” she quickly remarks.
In spite of her long list of accomplishments in the arts and business, when asked about her highest achievement, Sadell immediately exclaims, “My family! They have always shown me a lot of love and respect and never caused me any problems or trouble.” Her children, grandchildren and now a great-grandchild have, “all been a tremendous blessing.” In fact, Dolly was leaving for two weeks in Italy with her granddaughter, who just graduated from high school, when this reporter caught up with her for this interview.
Sadell passes on the wisdom of her experiences to her family saying, “I always taught my kids, whatever you do and however you do it, do it to the best of your ability.”
None of her family lives locally and they have asked her to move closer to them. She says she is “just not ready” to leave friends and her home across the street from the ocean to go live with them.
At the end of this interview, after reminiscing about all the special moments over her lifetime, Dolly Sadell smiled and stated, “I like to make things happen.” And make them happen she does.
People, Local History entertainment