Katrina - The Struggle to Bring Hope by Anderson Clayton
The FEMA ‘Trailer of Hope’. As we live and thrive in the hills of San Clemente, it is easy to forget what a monster our sea can be. The Asian tsunami catastrophes were an ocean away from Southern California. Yet a trip to New Orleans and the Gulf Coast serves as a chilling reminder of the watery terrors that can lie just off shore. As we contemplate the first anniversary of Katrina and the second anniversary of the Asian Christmas horror, I want to share a few reflections on a trip my wife Mary J. and I took to what is now the Big Moldy. 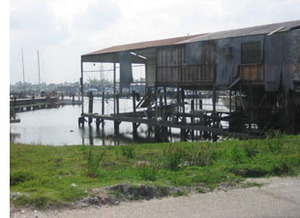 First, we drove east from the city for about an hour on I-90 to the vacation town of Bay St. Louis on the Gulf Coast, a shoreline that Katrina battered with 40 foot waves. When we were forced to turn north alongside the water by a destroyed bridge over the bay, we saw miles of 10 foot high concrete house pillars, but no houses, and steep stairs to front doors that no longer existed. The owners had built the homes with the storms of the past in mind, but not for Katrina.
We took a Grayline disaster tour of broken levees that spilled 10 feet or more of water and despair into the defenseless neighborhoods. Less than 150 of the over 300 miles of levees protecting the city have been worked on in anticipation of the 2006 hurricane season.
We later drove through the ghost town that has become the lower 9th Ward east of the French Quarter (Le Beaux Correa, undamaged and waiting for tourists). This was the home, however poor and ramshackle, to tens of thousands of mostly African-Americans (70% of the population before the storm and now only 30%). It is still a haunted wasteland of collapsed wooden houses and small forlorn neighborhood churches. 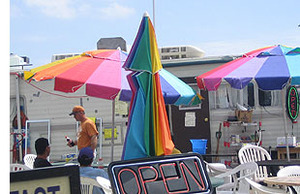 A huanted wasteland of collapsed We stared in silence at homes piled on homes piled on cars, and gigantic mounds of habitation debris. We noted the escape holes punched from the attics to the roofs, on which people languished and died from days without food or water. We did not just drive away from this area; we fled as dread, fear and panic threatened to drown us.
But it was our volunteer work one morning in a flooded blue-collar home in the Chantilly neighborhood that illustrated to us the immense personal losses that Katrina had inflicted. Tens of thousands of homes are still in the condition we were about to see. Bodies are still being found in such homes, but, thankfully, not today, not in this house.
We drove to the ACORN Group staging area in an abandoned strip mall. ACORN is an organization that is trying to save houses from the bulldozer (web site www.acorn.org).
There is no paperwork with ACORN. No insurance forms or releases or even the taking of names. Rather you are issued protective clothing (plastic glasses, mask, gloves and white suit) and then led to one of the neighborhoods where there is hope for reconstruction.
In New Orleans hope is marked by the presence of 10 foot by 28 foot white FEMA trailers. A neighborhood has to have electricity and sewer in order for a family to obtain a trailer to live in while they gut their house. There were no trailers in the lower 9th Ward but there are several on this street.
Gutting a house (removing all of the life possessions of a family and taking out the moldy drywall) can cost from $7,000 to $20,000. ACORN does it for free, day after day, with most of the volunteers coming from New York and California. (Blue states helping blue?)
This was a small house that had perhaps four adults living in it and several children. They apparently locked up their house and fled for their lives. Six to ten feet of water had seeped inside through cracks or up through the wood floor. Then it all drained out again weeks later as the Army Corps of Engineers pumped out the bathtub that is New Orleans. Then it sat for months in the heat and humidity. 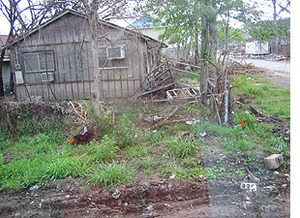 Signs of the havoc wrought by the hurricane.We entered through the front door like some white-clad mold swat team. We broke into the house, at the owner’s request, not to salvage personal effects but to empty it of the stuff of American life. The carpet, the drapes, the light fixtures, the pictures, the cabinets and the well used TV trays, all to go.
On first entering the small living room the inside seemed surprisingly normal. Then your eyes adjusted and you saw the black mold growing on the drywall all around you and the wet and sagging furniture and possessions. They seemingly left everything in their haste; their wallets, credit cards, money (Katrina dollars according to one veteran volunteer) and medicines. Under a queen bed were enough pairs of shoes to make Imelda Marcos blush, all squishy wet, their rainbow colors now mixed with mold.
On the wall was a picture of a proud man, in his Marine uniform, and next to it a plaque showing his graduating Leatherneck’s class from the San Diego Marine Recruit Depot in the 1960s. Perhaps in his career he had helped people in a far off land cope with some natural disaster? Now he and his family had all their worldly possessions discarded by strangers after this natural disaster. Is this the America he had defended?
In the small kitchen the refrigerator had floated up to the ceiling and then, on the ebb tide of the flood, gently perched on its side on the wooden counters four feet off the floor. The family room still had a puddle of water left from the flood. The well-used furniture had split apart as it dried out. I found a bottle of whiskey stuck behind the bookcase, safe perhaps from disapproval of other family members and yet handy for a surreptitious sip now and then.
A roll of toilet paper, soaked on the holder in the bathroom, had dried hard as a rock as it sagged into a tear shape. Covered now with green mold, it was almost a work of art. My wife, who grew up in Mexico City, took a particular distaste to the cuccarachas that scurried about as we emptied one large closet of soggy clothes.
The remains of one American family.Everything was lugged and dragged out of doors, or thrown through opened windows, into the front yard and gutter. Hour after hour, grunting and sweating, the work party hardly exchanged a word. We were like white-clad robots setting up the garage sale from hell. Joining us also were ACORN day laborers, Vietnamese-Americans, reportedly now being paid $50 per day, their fishing boats and livelihoods destroyed. All of us joined together in the grim and unceremonial disposal of the stuff of one American family.
Pretty soon the wet and moldy pile in the front yard (representing how many past trips to WalMart for this family?) was almost as high and as large as the house itself. It would be hauled away by the city. Perhaps then this family would return from the Great Gumbo Diaspora and get its own white FEMA trailer. Hope.
All we could do was leave New Orleans and fly back to the safety of our hills and our home by the sea. A friend, who is a well-informed leader of San Clemente, listened to our stories and expressed surprise that there were still problems in New Orleans. Our message to all is simple: one of America’s great cities is broken, very broken. Perhaps we Americans, if not our government, can fix it one house at a time. b
Travel travel