What Happens When We Sleep? by by Inchel Yeam, MD
Sleep is a vital part of our daily routine. In fact, it’s just as important as being awake. But, what is it that we really do while we sleep? Do we simply turn off the brain?
“Turning down” the brain and resting, is a complex behavior with a neurochemical basis. Within our brain, just behind our eyes, lies a set of nerve cells called the suprachiasmic nucleus. This group of cells has an intrinsic rhythm that functions as our “clock” and the mediator of our circadian rhythm. These cells are under the direct influence of light, especially the sunlight, and when the sun sets there are a series of neurochemical changes that take place including a rise in the melatonin level that eventually leads us to sleep.
There are also temperature changes in our body that follow the circadian pattern. Our body temperature is lowest during the deepest part of sleep. This usually occurs at four or five o’clock in the morning. From that point our body temperature begins to “warm up,” waking us from sleep. Our body temperature continues to rise during the day with a slight dip in the mid-afternoon. This is why we feel sleepy after lunch, not because of a heavy meal. Our level of alertness seems to follow our temperature curve and we seem to be more alert during daytime. Our body temperature peeks after dinner and it starts to cool down. As it cools down, we start to get sleepy. It is interesting to note that our internal clock, the suprachiasmic nucleus, sits just above the hypothalamus, the “master controller” of our metabolism. 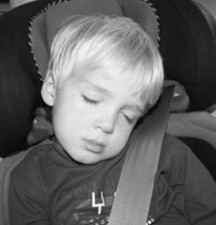 As we fall asleep, an interesting phenomenon occurs. There is a sudden relaxation of the whole body. Our facial muscles begin to relax even before we are fully asleep. Our eyes get “heavy” and we have difficulty keeping them open. The upper airway also relaxes along with chest wall muscles. There is a change in the breathing patterns - we slightly under-breathe during sleep. Some of us start to snore as the upper airway relaxes, and in individuals with sleep apnea, the upper airway collapses as they start having apneic episodes.
Sleep is organized into non-REM and REM sleep. These two sleep states appear to be distinctly as different as wake is to sleep. (Some sleep experts believe we exist in three different states awake, non-REM, and REM.) Non-REM is divided into stages one through four. Stages 3 and 4 are known as delta sleep or slow wave sleep. Non-REM is thought to be more of a brain resting state as there is decreased energy consumption by the brain during this time.
We generally start our sleep with light sleep that enters into slow wave sleep. It has been shown that increased levels of exercise increases slow wave sleep and it is thought that this sleep stage has some kind of restorative function.
REM stands for rapid eye movement. REM sleep is also referred to as “active sleep” or “paradoxical sleep”. During REM our brain is highly turned on and utilizes more energy than when we are awake. It is thought to be a primitive type of sleep and is the first sleep seen in developing infants. Through the night the brain cycles between Non-REM and REM sleep at approximately 90-minute intervals. As night progresses the REM phase becomes longer. About 25% of our sleep is spent in REM sleep, and it is associated with a dream state. When people are awakened during this period they will usually have vivid dream recall.
Because the brain is highly “turned on” during REM, other interesting phenomenon occurs. Our brain literally paralyzes our body to prevent it from moving. A series of changes occur in the brainstem resulting in an almost complete paralysis that occurs at the level of the spinal cord. In fact, spinal reflexes such as knee jerk reflex are absent during REM. If you have ever awakened paralyzed for few seconds, the brain has delayed in turning off the REM mechanism. Most people have experienced this feeling and occasional episodes are thought to be normal.
What happens when we sleep? Well, we are not absolutely sure. We know that the brain goes through some sort of restorative phase and that there is long-term memory stored as the brain cycles between various sleep stages. It has been shown that sleep provides some sort of psychological healing mechanism, and a person undergoing emotional trauma will sleep more and recover sooner.
We also know what happens when sleep is partially deprived. The most obvious change is that a person is tired and lacks energy. There is also an obvious lack of concentration. Even if they are not tired, psychological studies have shown that with minimal decrease in sleep time, daytime performance suffers. There is also strong evidence that sleep deprivation disturbs metabolism. Chronic sleep deprivation has been shown to slow metabolism leading to weight gain as well as fatigue. The various hormones that are released by the brain to control wake and sleep also appear to control hunger and satiety and vice versa.
Immune function also appears to be directly tied to sleep patterns. Lack of proper sleep will compromise the immune system leading to frequent illness. The best way to improve your immune function is to optimize sleep. Chronic sleep loss is also associated with fatigue and depressed moods. The most treatable cause of Attention Deficit Disorder is in fact sleep deprivation; most commonly being sleep apnea.
While we are not absolutely sure what happens when we sleep, there really is no substitute for a good night’s rest. The sleep experts have shown that the lack of it can be very detrimental to your health. b
Health health & fitness