The City’s Beaches & Parks Maintenance Manager, Keeps it Clean.
On July 10, 2006, Dennis Roger Reed will celebrate his 27-year anniversary with the city of San Clemente. Reed’s story is not your typical, city employee’s, tale. A multi-talented, multi-dimensional, individual, he is an unusual dichotomy - in his other life, he is a singer-songwriter, who has played for more than a decade on his own, and with a variety of folk, rock, blues and bluegrass bands - as well as the writer of a music column in a bi-monthly Los Angeles folk music, newspaper, “Folk Works.” 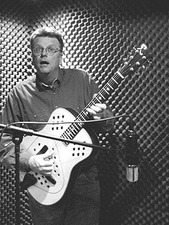