story and photos by Greg Niemann
Playa Requeson in the Sea of Cortez.With so much of Baja California slated for progress and development, it was welcome tidings for environmentalists when the United Nations Educational, Scientific, Cultural Organization (UNESCO) selected the marine-rich Gulf of California (Sea of Cortez) as one of its newest U.N. World Heritage Sites.

The site encompasses 244 islands, islets and coastal areas located in the gulf, which is bordered by five Mexican states: Baja California, Baja California Sur, Sonora, Sinaloa, and Nayarit.
Of 812 such designations worldwide, most U.N. World Heritage Sites are cultural locations, with only 160 designated natural attractions. Mexico now has 25 total U.N. designations, but this is only the country’s third natural attraction. One of the other natural sites was when Baja California’s Whale Sanctuary of El Viscaino was given U.N. Heritage Site status in 1993. Baja’s only other heritage site is the cultural Rock Painting of the Sierra de San Francisco.
According to UNESCO in its July, 2005 memo, the Gulf of California site is home to 695 vascular plant species, more than in any marine and insular property on the World Heritage list. Equally exceptional is the number of fish species: 891, ninety of them endemic. Additionally, the gulf contains 39 percent of the world’s species of marine mammals and one third of the world’s marine cetacean species.
While the Mexican government had conferred protected status on the area back in 1978, this new designation gives it international prominence and further encourages conservation and protection. UNESCO noted that the Gulf of California, one of seven worldwide sites named this year as, “one of striking natural beauty in a dramatic setting formed by rugged islands with high cliffs and sandy beaches, which contrast with the brilliant reflection from the desert and the surrounding turquoise waters.” 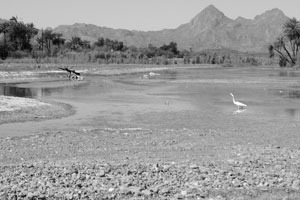