by Rosemary L. Sieve
There’s change in the air. Dana Point Harbor is going to have a well-needed face-lift and by the year 2007 the harbor as we know it will no longer be the sleepy beach haven we’ve all grown to love.
In 1997 a group of people, including 5th District Supervisor Tom Wilson, got together to see how best they could rejuvenate the Dana Point Harbor area. Many meetings of outreach with merchants, boat owners, residents and other community members have occurred and all feedback and ideas have been closely looked at. And, the general consensus has been that the building of a successful harbor of tomorrow will yield a legacy of enjoyment for generations to come. 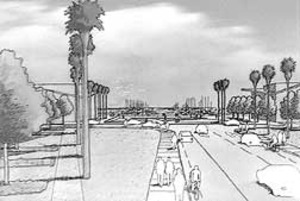 According to the DPH newsletter the ‘draft concept plan’ states that the Harbor will retain its family friendly environment for future generations, ensuring that it remains the best small-boat harbor on the West Coast. Plan priorities include keeping the Harbor’s character and ambience but with improved public access – this is considered the primary goal. No commercialization on the Island will happen thereby protecting the future of the Yacht Clubs. To satisfy parking demands, erection of ‘parking decks’ built level with Dana Point Harbor Drive will occur and efforts will be made to keep the existing parklands, beach and landscape as is. To enhance the general area there will be an ‘Event’s Plaza’ where concerts and other entertainment can be held. And, to the delight of the merchants, especially those currently at the rear of the harbor, all businesses will have harbor views and some will relocate to the new proposed waterfront promenade. This pathway will be up to 40 feet wide allowing room for pedestrians to meander and sit on benches where they can admire the ever-changing beauty of the Harbor or watch the sun sink behind Catalina Island. A three-rack-high dry storage unit for 550 vessels will be located in a secured area under roof and for this privilege there is already a waiting list. (Contrary to rumor, there is no plan to move any of the smaller boats from their current slips in the harbor, except when slip renovation is undertaken, – much to the relief of all concerned boaters.)
Getting Started 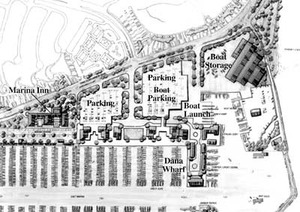 Construction is scheduled to begin late 2004 under the auspices of the highly regarded architectural firm A.C. Martin, and it is anticipated that all improvements will continue through 2010. Changes will be made using a phased-in approach to minimize disruption and downtime for Harbor businesses – a huge consideration. For not only will owners have to deal with the added costs of moving and tenant improvement, but added to the stress is also a fear that customers will stay away if the revitalization causes too much disruption.
Jim Miller, long time owner of Coffee Importers, admits he and the majority of other merchants are cautiously optimistic about the proposed changes. “This area is now considered a destination due to many fine hotels that have been built close by. Consequently, we need to keep up with the times and improve the area to encourage the tourists to stay here and spend their money locally rather than disappearing north to Newport Beach.” Miller continued. “Right now 75% of my customer base consists of locals during the off-season. Hopefully, tourists will constitute a larger percentage when the redevelopment is completed.”
Local people are very interested in the future of the Harbor. Maurine Lacher remembers moving to Dana Point before there was a harbor. “We enjoyed it back then and my sons had loads of fun surfing here. However, I love the idea of more people taking pleasure in this area – I just hope that there won’t be too many of them and trust the area doesn’t become too commercialized.” A desire voiced by the majority of residents in Dana Point.
What’s the cost and where will the money come from? 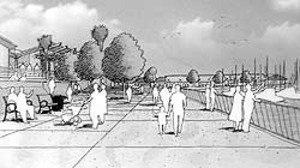 Paul Lawrence, Manager of Dana Point Harbor Leasing and Revitalization of Harbors, Beaches and Parks in the County of Orange assures us that by law, all revenue generated in the Harbor must remain in the Harbor and will pay the majority of the expense. The County of Orange is planning to finance the cost of the proposed long-term improvements through low-interest loans and the sale of bonds. These will be repaid, again, with revenue generated from the Harbor. The County will also be applying for grant funding. No general funds, or new taxes, will be used to pay for the improvements.
This then is the future of our beloved Dana Point Harbor. The development is considered a partnership between the residents, merchants, boaters, the City of Dana Point and the County of Orange. Let’s all pull this dream together and make sure that all whom love the Harbor will not be disappointed in what is generally known as ‘progress’. Make sure your voice is heard. Get involved and ensure our legacy will indeed yield enjoyment for our descendants – and not yield one of disappointment.
For more information check out www.DPHplan.com
Tom Wilson:
thomas.wilson@ocgov.com
Paul Lawrence:
paul.lawrence@pfrd.ocgov.co
Community dana point life