Our Coastal Trail is a Winner! The City's Beach Trail is a fantastic amenity.

You aren’t the only one who loves the San Clemente Coastal Trail! This past October 2010, our beach trail was honored with the “Quality of Life Award” presented by the Southern California Chapter of the American Society of Landscape Architecture.  Hundreds of projects were submitted from all over the southland. It should come as no surprise that our Coastal Trail arose to the top as something special. A big thank you goes to Borthwick, Guy and Bettenhausen Inc., our landscape design team, for nominating the trail. There is nothing quite like it anywhere along the Pacific Coastline. Back in 2009 the American Planning Association recognized the San Clemente Beach Trail as the winner of the “Hard-Won Victories Award”, moving beyond the regional Southern California division, to win the entire State in this category. This is amazing. At the state level our trail was competing against thousands of applicants. We didn’t win nationally; I guess it took some other city longer than the ten plus years of hard work it took us and dealing with more regulatory agencies than can be listed here today to get their trail or project built. God bless them, must be some project. 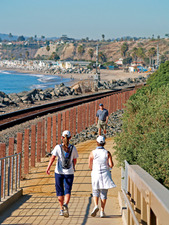 Who would have thought that a group of committed citizens coalesced in the living room of John and Stephanie Dorey late in 1997 would be the beginning of a revolution to change the community mindset regarding how to deal with our coastal heritage? We were outraged and would just not accept a “trail” that was really a 12-foot wide paved walkway and bike path incased by 6-foot high chain link fences on both sides to protect users from trains and trespassing onto the nearby railroad track. The worst things about that original plan would have been the loss of many of our beach access points and the ½ mile of seawall that would have been necessary to support this “road on the beach.” As a result, DeRail the Trail was born. Climbing out of our ocean-minded spirits, we found our land legs and began breathing.

To say that it was a difficult journey would be a major understatement. After convincing the city council to defeat the original poorly designed plan in 2000, in a unanimous vote, the city created the Railroad Corridor Safety Education Panel (RCSEP). We were tasked  to design a trail that would meet the safety needs of over two million annual beach users, address the concerns of the transportation agencies, as well as maintain the rural character of the Village we call San Clemente. Sixteen members from the community participated in the RCSEP and one year later, a design for the trail was hammered out.  Three members from the RCSEP were selected by their peers to shepherd the community sensitive designed trail through the multiple rail, transportation and regulatory state agencies to make sure that its integrity was not compromised. John Dorey and Kathryn Stovall Dennis, both co-founders and presidents of DeRail the Trail, along with Bob Noon, a member of Operation Lifesaver, who unfortunately passed away shortly thereafter, now became the champions of the new and improved coastal trail. 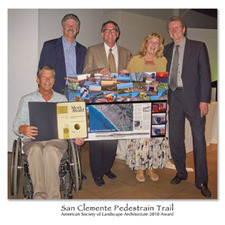 But it was not just the outside regulatory agencies that had no interest in our little coastal trail. There was a group of San Clemente citizens who opposed any improvements or changes to the difficult to navigate goat trail even if it meant it would become safer and easier for more people to get to the beach. To get to most of our beaches at that time meant walking near or on the railroad tracks then climbing down the rip rap boulders to get to the sand. They didn’t want anyone else to be able to use their beach. And in fairness, we are all a little possessive of our shoreline territory and the little plot of sand we lay our towels on. These protestors were afraid that the improved access would mean more of their neighbors; friends and visitors would now be able to share in the same delight they had just being near the beach. Well, they were right. It did open up our coastline to a much greater group of people. By any standards the trail has become a huge success. And the demographics have changed dramatically. The largest new user profile is women of all ages. They are joggers, walkers, some exercising their dogs; many trek the whole length and back with their strollers filled with smiling exuberant or cute sleeping kids. It is heartwarming to see older couples arm in arm lending each other steady support, or the younger couples with their children darting around exploring or pedaling unsteadily on their little bikes. We now have exercising groups both casual and formal, our very own stroller gangs, bike riders, crack of dawn serious athletes, surfers looking for that perfect break, kids with boogie boards, volleyball players and man’s best friends dragging along whoever is attached to their leashes. It’s fantastic how popular the trail has become.

We have found new friends and allies during this journey. Orange County Transportation Authority (OCTA) became strong partners with the city to help us overcome some of the hurdles. Pre-beach trail days, the city of San Clemente had the unfathomable short lease period of 30 days to use the railroad right of way. Now we enjoy an unprecedented 20 year lease for the land that our little decomposed granite topped trail sits on, because of their dedication to the citizens and overriding safety in the rail corridor.  Helping us along the way were the California Coastal Conservancy, Coastal Commission, Trails with Rails, Coastwalk, and our local politicians. John and Kathryn received a “State Assembly Award” for their work on the coastal trail along with becoming the first annual recipients of the Watershed Taskforce “Stephanie Dorey – Blue Water Dolphin Award” for their continued dedication not only to the trail but protection of the coastal zone. John continues this work as an active member of the City Council’s Safety Quiet Zone Taskforce working with OCTA and other rail and transportation agencies to safely eliminate the incessant train horns in our rail corridor. The Coastal Trail is a beautiful experience for all of us who are fortunate to live in our Village by the Sea. b

Kathryn and John are both active in the Yes on Measure A campaign for Playa Del Norte.