by Anne Batty
The Healy brothers, Kent and KyleAt the ages of nine and ten the lives of San Clementeans Kent and Kyle Healy took a drastic turn. Born, bred and well-established in a small school in San Jose, CA, these tanned, blonde, quintessential California boys were positive their parents had lost their minds when they decided the family would move halfway around the world to live in New Zealand.
Little did they know that move would be the catalyst and training ground for an entrepreneurial future.
“From the time we moved to New Zealand, our lives were constantly in flux,” remarked Kent, flashing a wide exuberant grin. “We ended up attending five different high schools, living in eight different houses and residing in six different cities. It was exciting, but the constant changing was often tough.”
Forced to adjust to an ever-evolving environment, the brothers grew up looking at life differently, eventually beginning to see their situation as an opportunity to reinvent themselves.
“Each time we changed cities, homes or schools, we realized nobody knew us,” Kyle explained. “So we could become whoever we wanted to be. It was a challenging time, but it was fun too.” 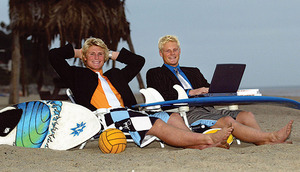