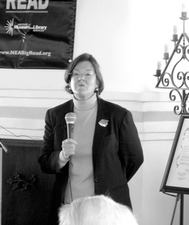 When To Kill a Mockingbird was first published in 1960, The Washington Post’s review stated, “A hundred pounds of sermons on tolerance, or an equal measure of invective deploring the lack of it, will weigh far less in the scale of enlightenment than a mere 18 ounces of new fiction bearing the title To Kill a Mockingbird.” The book remained on the bestseller list for 88 weeks, winning the Pulitzer Prize in 1961. It was the only novel ever written by Harper Lee. She felt she’d said it all.
On March 5th, the Casa Romantica launched the first celebratory event of its Big Read program, featuring the same text. Additional activities would include showings of the widely acclaimed film based on the book, as well as ten discussion groups led by community leaders meeting throughout the City over a one-month period. The Casa’s executive director, Jan McKay, welcomed the large “kickoff” crowd, crediting the National Endowment of the Arts (NEA) for making the program possible with a $20,000 grant as part of a national pilot reading project involving 38 states. San Clemente’s was Orange County’s only program. The book and film were selected by the Casa’s planning group to encourage as many local residents as possible to join together “…in revitalizing the role of literary reading in American popular culture.” The heart of the plan was to have the entire community read the same book at the same time.
The highlight of the gathering was the appearance of Mary Badham who, in the film, had played the role of Scout. A 2004 NEA study, Reading at Risk: A Survey of Literary Reading in America, revealed a critical decline in reading for pleasure within the country. Fewer than half of American adults were readers; only one third of adult males read books. The declining rate for young adults, 18 to 24, was even lower. It is estimated that between 1982 and 2002, there was a loss of 20 million potential readers. 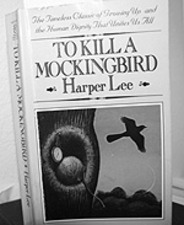 “This program joins the myriad of programs here at the Casa that encourage literary arts alongside fine art, history, ecology, and cultural offerings,” said McKay. Additional sponsors of the Big Read program included the Orange County Public Library System, Camp Pendleton, the San Clemente Times, The Capistrano Dispatch, Griffin Optometric Group, and Moulton Elementary School. In addition to local San Clementeans and San Clemente High and Moulton Elementary School students, Camp Pendleton Marines would also be reading the text and participate in discussions organized by the officers’ and enlisted men’s’ wives groups. Lt Col Sam Pelham spoke warmly about the Marine’s involvement, joking that, at long last, he was finally able to make use of his college major – English literature.
The highlight of the initial gathering was the appearance of Mary Badham who, in the film, had played the role of Scout, the narrator, and daughter of the main character, attorney Atticus Finch. Gregory Peck won an Oscar for his role, as did the film’s scriptwriter, Horton Foote. Badham had won a nomination for Best Supporting Actress, losing to Patty Duke who played the young Helen Keller in The Miracle Worker. Badham joked about the awards ceremony, suggesting, “I’d rather have been in a barn with a horse than be there. Patty Duke really deserved the Oscar.”
Mary Badham was very expressive and low key. She admitted her film career ended a year after the “Mockingbird” film, having completed three more movies and two television shows. She retired from the movie industry at age 13.
In speaking about her love of the film, as well as the book, she noted that “…it was a one night read,…it speaks at many different levels,…it suggests that we’re all banging into the same wall, that ignorance is the worst of all evils,…it was a bottomless well of issues…which included single parent homes, community issues, women’s issues, and legal issues.”
Badham also noted that Atticus’ courtroom summation in defense of an innocent Negro has continued to be a lesson still used in law schools throughout the country. She spoke of how close the film’s cast became over the five-month shooting schedule. “Gregory Peck was almost like a real father to me,” she said. “We’ve all stayed in touch over the past forty seven years.”
During the question and answer period, Badham responded that she was too young to really get to know the book’s author, Harper Lee. The writer visited the movie set only briefly. She liked the film script of her story, which she had declined to write, preferring that a professional screenwriter develop the book’s film adaptation.
The star encouraged those present to “… read to your children … take pictures of people reading, and enjoy ‘The Big Read.’” She will make other appearances throughout the country where “Mockingbird” has been adopted. Her presence was a genuine motivating factor for the other planned events. She also introduced one of the Casa’s film showings and visited several classes at San Clemente High School.
Participants in one discussion group, from left to right; Julie Cook, Bill Thomas, Maureen Ohnstad, Jan McKay, Karen Ahola, Fred Swegles, Michael Kaupp, Stephanie Beverage. Jan McKay asked a new local resident, Elaine Falk, a retired Beverly Hills High School English teacher, to serve as a trainer for the discussion leaders. Throughout her long career, she had required all her students to read To Kill a Mockingbird. Faulk knew the book intimately, mentioning that her classes also acted out the courtroom scenes as part of their studies. She prepared helpful materials that were used in the ten reader gatherings, including descriptions of all the characters appearing in the book, quotations of important passages with page numbers, a list of major topics and themes, as well as discussion questions.
Discussion leaders, all with varying backgrounds, included Casa Docent Maureen Ohnstad; Norb Garrett, founder/publisher of the SC Times; Karen Palmer, Owner, Village Book Exchange; Michael Kaupp, Owner, Stanford Court Antiques; Kevin O’Connor, Dean of Liberal Arts at Saddleback College; Fred Swegles, PhotoJournalist for the Sun Post News; and City Councilwoman and Mayor ProTem Lori Donchak. They reported, as did attendees, that the book review sessions met with considerable success. Many participants had read the book many years ago, re-reading it for The Big Read. Discussions were lively, valuable, and everyone participated.
There was also agreement that both the book and the film were outstanding in their own ways, which is rare when written literature is translated into film. Many were unaware that one of Harper Lee’s childhood friends was Truman Capote, and that they continued their relationship well into their mutually successful writing careers. Capote was portrayed in the film as the character, Dill, a childhood friend of the young Finches, Scout and Jem. The book took place in “The Jim Crow South” in the ’30s when racial prejudice was in vogue. It was based on Harper Lee’s own experiences as a young girl, growing up in a small town in Alabama.
One of Atticus Finch’s quotations is, “You never really understand a person until you consider things from his point of view…until you climb into his skin and walk around in it.” It was the same way with the book and the film. b
Community community news