by Bill Koelzer
Jack Kulp, President and founder of TrafFix The old saw, “necessity is the mother of invention,” holds particularly true in the entrepreneurial world, as Jack Kulp, 71, President and Founder of TrafFix Devices Inc. (www.traffixdevices.com), will attest.
TrafFix Devices - since April 1 in its new building next to Metagenics on Avenida La Pata in Talega - has 225 employees worldwide, 50 in San Clemente, owns other plants in Fairfield, Iowa, Adelanto, CA, and Tijuana, Mexico, makes nearly 100 products and does almost $20 million in annual sales.
It has become one of the nation’s largest one-stop shops for everything in signs and stands, barricades, cones, crash attenuators, and channelizer drums for road safety and traffic control.
However, it might not have even existed if Jack Kulp had not lost his job in 1987.
In that year, after he had managed the traffic signal division of mega-billion-dollar conglomerate Lear-Siegler Inc. for 13 years, financial woes forced LSI to sell the division to raise needed cash. Jack offered $9 million in leveraged funds and a competitor offered $9 million in hard cash, so Jack was out of a job.
“Well, I felt sorry for myself for about a week or so,” Jack says, “then I decided that I might as well get back into doing the thing that I’d been doing for 13 years before that—-making road safety products...so I started designing my own stuff out of our house in San Juan Capistrano.” 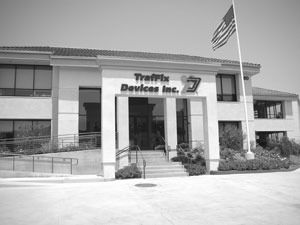 Fortunately, Jack had the right contacts. “Because of running that division of LSI, I knew all of the manufacturers, vendors and customers, and that gave me the basis to start my own business, which I had always wanted to do. It was about two and a half years that we operated out of the house because it was pretty nice sitting around in my PJs in the morning and selling truckloads of orders around the country.”
These devices absorb collision impact and thereby reduce damage and injuries on highway jobs. Soon, Jack needed help. “So I hired a former competitor to handle sales east of the Rocky Mountains and I handled everything to the west. My business plan has always been to own the intellectual property, own the tooling, own the design, and just have the plastic or steel parts made by others. All we would do is finish it, inventory it and sell it. And that’s what we do, even to this day.”
To help stay competitive, TrafFix includes some foreign suppliers. “We have components made in China, Korea and Taiwan,” says Jack. “It’s financially necessary today to make some components abroad. Although most of what we make is still manufactured and built in America.”
Jack also has a partnership “in which a friend and I manufacture roll-up road signs (http://tinyurl.com/5vukxc) and sew fabric materials for them in Mexico.”
Jack’s firm leads the industry in innovation. Jack states, “Competitors generally follow our leads as with the ‘grabber cones’ (http://tinyurl.com/5dxoqu).” These channelizer marker cones have easily-grasped narrow, flexible tops which allow a worker in a moving vehicle to pick them easily off a street after, say, a striping job completes.
Jack adds, “The Orange Barrel (http://tinyurl.com/5pgtg7) was my invention in 1975 and now there are hundreds of thousands of those sold every year... that’s the orange drum with orange and white stripes on it that you see on road jobs.”
Jack also designed the first two-piece break away drum in 1975 when he was with LSI. “And we have many more products here that we’ve built over the years that no one had ever built before.”
For firmly anchoring its cones and barrels, TrafFix makes its own bases, from recycled rubber tires, at a wholly-owned crumb rubber (http://tinyurl.com/6oy95l) plant in Adelanto, CA, which processes over 100,000 pounds of crumb rubber weekly for sale worldwide.
TrafFix Devices is also the leader in selling Impact Attenuators (http://tinyurl.com/494rpn).
TafFix Devices new building on Avenida Pico in San Clemente. These devices absorb collision impact and thereby reduce damage and injuries on highway jobs. Say a driver falls asleep on the freeway and runs off the road at high speed... these devices, (often truck or trailer-mounted) (http://tinyurl.com/5usygz), or material-filled barrels (http://tinyurl.com/632ky2), shield work crews and protect motorists who otherwise would have crashed into the unyielding back of a construction vehicle or worse.
TrafFix’s biggest customers are the traffic barricade and light rental firms —- independent businesses that rent traffic control and safety equipment to contracting firms who work on roads and highways. 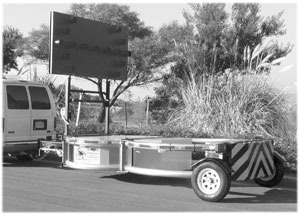 “The second biggest purchasers,” Jack explains, “are cities and counties including San Clemente, Orange County and the rest of the country. Our sales force covers North and South America and much of the rest of the world, including China, Australia, New Zealand, and the Middle East.”
Before a device legally goes on a Federal highway, it has to be proven to meet National Cooperative Highway Research Project standards. “Everything that we make today meets these NCHRP 350 standards,” says Jack.
Looking to the future of TrafFix, Brent Kulp, Jack’s son, and the firm’s Vice President-Sales and Marketing, relates, “We see only growth, both domestically and internationally, especially as local, state, and federal governments see the need for repairing our country’s transportation infrastructure, and developing nations begin to make their highways safer.”
Over the years, the firm outgrew the five buildings that it had occupied in Rancho San Clemente Business Park and Jack says it’s immensely more efficient to be in this single new building—-one that Jack, who has a Mechanical Engineering degree from Cal Poly Pomona, worked upon designing from April 2003 to April 2008.
“I learned much in college that helped me in my career,” Jack recalls, “But mostly I learned just by doing ... hands-on experience is the greatest.”b
TrafFix Devices, Inc. is located on Avenida Pico and can be reached at 949-361-5663, www.traffixdevices.com or Info@traffixdevices.com .
People community news