Pacific Coast Steps to the Plate by Bill Thomas
Pacific Coast National Bank, the sole bank headquartered in San Clemente, became the first local business to sponsor a sport field at the forthcoming LaPata/Vista Hermosa Community Park. The bank’s trustees recently approved a $100,000 donation to be paid over a period of seven years. Bank President Michael Hahn wrote in a supportive letter, “I believe that having recreational options available for today’s youth is essential in promoting character. The LaPata/Vista Hermosa sports complex is well planned and convenient for the citizens of San Clemente. We’re very excited to be a part of it.” 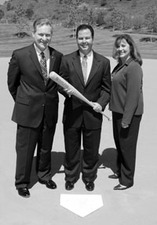 Hahn also issued an appeal to owners of other San Clemente businesses to take advantage of the sponsorship opportunities. The first installment of the bank’s commitment will soon be presented to the San Clemente Beaches, Parks and Recreation Foundation, which through an agreement with the City of San Clemente, serves as the non-profit funding repository for the new sports complex. The Foundation is committed to help raise four and one half million dollars to defray some of the estimated $33 million needed to fund the sports center. Pacific Coast National Bank Baseball Field will be one of three in the new park; two are as yet unnamed. Four soccer fields, a football field, and the aquatic complex also seek sponsors from San Clemente’s businesses, service clubs, and citizen groups. Other opportunities for donor recognition include tiles, trails, gardens, fountains and benches. Contributions have already been received from KWVE radio, the former Cheetah Track Club, Jeanie Moore of Arbonne Skincare, OC Woodworks, San Clemente Jr. Women’s Club and Talega Dental. The San Clemente Swim Club (SCAT) and the San Clemente Beaches, Parks and Recreation Foundation have each raised $20,000 to help fund the aquatic complex.
City Manager George Scarborough verifies that the City council is committed to building the park as a number one priority. “It has been for some time,” he said. “We’ve presented the strategy for funding the construction of that park. That strategy includes three opportunities. The first and principal opportunity is to relocate the current administrative staff at the Presidio city hall site to our building at Calle Negocio. We have a civic center plan that the City Council has reviewed and approved preliminarily that would accomplish that purpose.”
Scarborough indicated that once the city hall staff relocates to the new city hall and the fire department to its new downtown location, the Presidio property will be declared surplus. “ Therefore, the city can sell it. We have an appraised value of $15 to $16 million,” he added.
The City has already put aside $17 million for the LaPata/Vista Hermosal project; the revenue from the sale of the City Hall will come close to the funding difference. If the overall cost of building the park is higher than estimated or the City Hall site is sold for less, Scarborough voiced a second line of strategy, “…the Vista Hermosa/La Pata property includes a nine acre commercial area that has always been seen as property we would use to help fund the operation of the La Pata /Vista Hermosa community park site. A portion of those nine acres could be sold to generate capital to fund the gaps between the construction costs (of the park) and the ultimate sales price of City Hall. So, I am absolutely confident that we will find a way to build this park, and we’ll have it. If everything else fails, our recent financial forecast that was presented to the City Council just in the last month does indicate that we have some bonding capacity. We can borrow money essentially in our general fund to provide a backstop to many other subjects not being made complete.”
Borrowing money, to Scarborough, is a last resort. He looks forward to a new Negocio-based city hall with the majority of the City staff relocated and consolidated in one location. “Which,” he added, will be much more convenient for our public generally and certainly a better way to operate a city hall function…and the old fire station (1030 Calle Negocio) will become an additional adjunct and provide an interesting additional capacity for different types of city projects. The wisdom of the City Council when they bought that Negocio building in the early ‘90s is now coming to fruition. They acquired it for a very good price that now represents solutions that in many ways may be our solution for construction of LaPata/Vista Hermosa Community Park.”
Discussing a time line, Scarborough noted the new combined downtown fire station and senior center will have to be constructed before the Presidio facility, including the present firehouse, can be sold. The park would be built simultaneously, with ground breaking by the end of this year and completion during 2008. 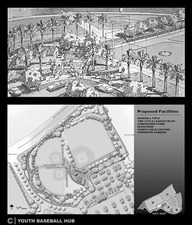 “We’ll have to cash flow the construction period,” Scarborough confirmed. The four and one half million committed by the Foundation will help bridge gaps.
“Utilizing new and existing foundations as funding mechanisms has become commonplace with park and recreational municipalities,” stated Bill Kroegler, Director of Development at the West Virginia’s enormously successful Oglebay Foundation, at the recent National Park and Recreation Association Conference in Seattle. “The sponsorship, signage, and promotional recognition of contributing businesses, industrial concerns, service clubs and donors taking fiscal responsibility for directly investing in their community’s recreational, cultural and leisure facilities and activities has largely substituted for bond issues and special funding districts.”
Kroegler has served as a consultant with numerous park and recreation departments throughout the country, including the cities of Modesto and San Carlos in California.
Dianne Hoover, in her recent article in the national publication, Parks Recreation, “What’s in a Name,” wrote that in Bakersfield, along with providing naming rights for seven pavilions in a new park and an adopt-a-bench-program, the new amphitheater is named for Bright House Networks, which will contribute one half million dollars over a five-year period. In Cincinnati, Ohio, the Cincinnati Recreation Commission has been given the right to name rooms, fields and other park features to recognize donors. A recently built gymnasium was named in honor of a bank. A funeral home donated $50,000 for naming rights of a multi-purpose room.
Barry Weiss, Director of the San Carlos Parks and Recreation Department, announced, “Private sector assistance can take us to greater heights than ever thought possible with traditional funding. This approach has already become an integral part of the way business is done in my city. By donating to a foundation, a company receives a sizeable tax write off, and it receives the benefits of donating to a well-received city cause, including the good will that goes with a company having its name associated with a public venue each day.”
With approval of the City Council and official submission of its contribution pledge to the San Clemente Foundation, Pacific Coast National Bank will receive signage recognition around its LaPata/Vista Hermosa baseball field, four weekends each year for bank picnics and special occasions, and parking privileges. Also included are publicity on park-related publications, name on the website and license agreements and public relations materials, several additional promotional benefits, and, of course, acknowledgment of the significant amount of its $100,000 donation to a non profit, 501 3 © corporation.
Conceptualizing this unique San Clemente Park fundraising program, the LPVH Community Park Corporate Sponsorship Committee has been meeting over the past year. The Committee, consisting of City of San Clemente representatives Councilman Wayne Eggleston and Assistant to the City Manager Laura Ferguson; Foundation directors Raad Ghandous and Bill Thomas; and Jeff McConnell, Chairman of the San Clemente Beaches, Parks and Recreation Commission, has created an informational brochure for potential donors, set prices on park components for naming right privileges, identified recognition benefits for sponsors. They planned the LPVH Community Park Launch on October 27, 2006, which served as an introduction to the park. It featured large pictures of the plans for the soccer, baseball and football hubs and the aquatic complex, and drew over 300 youth, coaches, civic and business leaders. Speakers included prominent local athletes who credited their success to local playing fields and swimming pools where they practiced and played in their youth, including former Olympic Gold Medalist and Waterman Mitch Kahn; Brad Budde, an All American football star at USC and Kansas City Chiefs professional; Jim Birdsell, Waterman and international swimming competitor; San Clemente High School soccer coach Mike Pronier; and Geoff Blum, current San Diego Padres third baseman. Music and food were also provided by the City and the Foundation.
Fund-seeking teams consisting of City representatives, Foundation directors and volunteers will be visiting leaders of local and nationally-based San Clemente businesses, service organizations, and speaking to community groups during the coming year. Brochures describing naming right opportunities, benefits, and submission instructions are available.
This is a call to action … LaPata/Vista Hermosa Community Park will increase community interest, expose more people to recreation opportunities, and enhance the region as a premier place to live, work and raise a family. b
If you or your organization is interested in LaPata/Vista Hermosa sponsorship, please call (949) 361-8254.
Community feature