by Anne Batty
Sandy and Jerry Pressnell working together and making it happen!After spending five minutes with San Clementeans Jerry and Sandy Pressnell, owners of Doheny Plumbing, it’s easy to understand how they, have built such a successful business. With a Karma-like, be honest, do it right philosophy, and 27 years experience, their venture has grown from a one-man, sometime two-helper shop on Doheny Park Road in Capistrano Beach, into a duel location business on Avenida Granada in San Clemente, finally ending up as a 14-truck enterprise in one of Talega’s newest business parks. 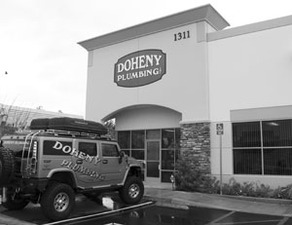