Learning Labs - with a Sail by Bill Thomas
Would you admit that one of the greatest blessings we have here in San Clemente is the ocean? We marvel at the incomparable sunsets. Some occasionally stick our tootsies in the water, while many religiously pursue the phantom wave that continues to elude them on a daily basis. Others just enjoy watching the waves pushing their individual and unique courses towards the shore. Also, within our fortunate local mix, we have the sailing crowd: experienced sailors and boat owners, occasional sail boat renters and trip takers, and those who’d like to join that crowd, frustrated “non-sailors” like me. I finally decided to do something about it. After reading the following, you might want to follow my lead.
Saddleback College offers a seaworthy and unique summer course, a three-day, ocean-based experience in which the classrooms are Catalina sailing vessels, and the instructor and his compatriots, certified boat captains, who guide boats between Dana Point and the Channel Islands. This past summer, I was one of fortunate registrants…
Orientation 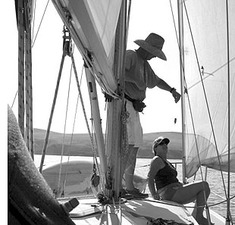