Holiday Traditions, Memories from the Past by Judy Meler
In the Greek tradition, good luck and prosperity for the new year comes to whomever gets a coin in their piece of bread. What traditions do you or your families follow during the holidays? What makes your holiday memories special to you? 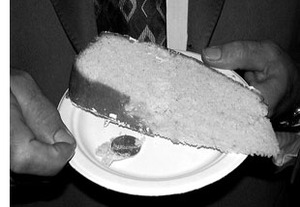 Some local San Clemente residents and a few families from as far north as Mission Viejo and Laguna Beach, shared a few of their special holiday memories with the Journal. Many of them practice traditions they or their families brought to the US from other countries.
San Clemente city council candidate, Sally Jeisy, who has been busy working on her campaign, tells us the holidays are her” favorite time of year.” She loves to deck the halls of her home for the kids in her family of all ages. Her adult children and grandchildren equally love Sally’s annual, homemade gingerbread house. But Jeisy favorite tradition happens on Christmas Eve when everyone opens one gift together at 9 or 10 pm. All the family’s friends without families of their own nearby are invited for Christmas Eve dinner and the Jeisy’s may have 30 or 40 friends and family members gathered around the table, at Sally’s sister Nancy’s home in Oceanside. Everyone opens a funny gift, enjoying Sally’s hand-crafted decorations, as they relish just being together.
Pall Gudgeirsson, Assistant City Manager/City Treasurer for San Clemente was born and raised in Iceland. Gudgeirsson’s family follows the traditional Icelandic customs when it comes to celebrating Christmas, but they have modified them to fit American traditions. His family celebrates Christmas Eve and Christmas day, Christmas Eve, with a traditional Icelandic dinner, consisting of Icelandic lamb, if possible, potatoes, red cabbage and soup. The soup will contain a bean and the person who gets the lucky bean wins a present. The Icelandic people have each child put out a shoe 13 days ahead of Christmas, and they receive little presents each night if they have been good throughout the year. This represents the “thirteen Icelandic Yule Lads,” who are quite famous in the Scandinavian countries; many stories abound on the Internet about their folklore. The Gudgeirsson’s open presents on Christmas Eve after dinner but also celebrate the traditional American Christmas on Christmas morning. What enchanting customs Pall follows, can’t you picture them taking place in Iceland in times of old?
San Clemente resident, Gus Gatsios, is originally from New York and of Greek decent. Currently in sales, Gatsios is a one-time restaurant owner who enjoys following the Greek holiday tradition of baking a round circle of bread with coins inside. When the bread is broken, tradition has it that whomever gets the coins in their piece will have the best luck and most prosperity in the New Year. 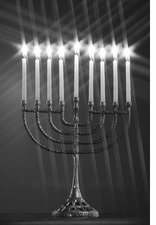 John Wilson who lives near downtown San Clemente has a favorite tradition he follows with his family every year. Wilson walks from his house to downtown San Clemente on the day after Thanksgiving, November 25, to the annual “Puttin’ On The Glitz.” The downtown merchants stay open late so holiday shopping can be done. There is live entertainment - John’s favorite being the bagpipe players - hot apple cider served, and Santa arriving to join the festivities and pose for photos with the kids. The following weekend Wilson and his family walk over to the San Clemente Community Center to participate in the lighting of the community Christmas tree, and to enjoy another Kodak moment with Santa. Wilson tells me that as a child his family would wrap all the pictures on their walls at home as gifts, turn the Christmas lights out, light their fireplace and watch and listen to the Christmas Carolers at midnight on Christmas Eve.
The Jewish tradition of lighting the Joe Anderson, City Council Candidate, tells me Christmas is the one time of year all his extended family gets together. They meet on Christmas Eve, usually attired in pajamas and slippers, to open gifts together. They all go to church to a late night service. The family eats traditional, American Christmas fare. Anderson sometimes smokes a turkey out-of-doors all day and alternates the place the family meets from his home to his brother’s home. Anderson’s son is in the Marine Corp., and has been deployed all over the place, though currently in North Carolina, he will in all likelihood be sent back to Iraq for a third tour of duty in the spring of 2007. We wish him God-Speed and a safe return this holiday season.
Danny Narrens, a Laguna Beach resident, who hails from Ohio, celebrates Hanukkah, the “Festival of Lights.” The tradition of lighting the Menorah can be traced back almost 2,400 years. Hanukkah celebrates one of the most important miracles in Jewish history and reminds us of the triumph of faith. It takes place every year in mid- to late December. The menorah holds nine candles, eight represent the eight days of Hanukkah, and the ninth is used to light the other candles. On the first night, only one candle is lit, but with each successive night, an additional candle is lit. On the eighth night, all the candles are lit. This ritual allows the menorah to become brighter and brighter each night. Blessings are said before the candle lightings each night to commemorate the miracle of Hanukkah. Traditionally the family gives the children “Gelt”, which are often chocolate coins, given as presents, in place of, or with real money, as rewards for studying well. Traditional Hanukkah foods are served. Danny and family enjoy this time together partaking of brisket, potato pancakes (latkes), jelly-filled donuts and cheese blintzes, all Hanukkah favorites.
Tony and Danute Mazeika, Mission Viejo residents, are both of Lithuanian heritage. They are Catholic, and their holiday traditions begin with the celebration of Advent (the anticipation of the birth of Christ), continue with the Christmas Eve Vigil, and end with the celebration of the Three Kings on January 6th when they finally take their tree down. They decorate their Christmas tree with ornaments made of straw and in modern terms use white drinking straws. The Mazeika’s also have an Advent wreath on the dinner table with 4 candles: 3 purple and 1 pink. The candles are progressively lit before supper each night, adding one, each Sunday before Christmas.
The focus in Lithuanian tradition is the Christmas Eve vigil, setting the table with a white tablecloth upon straw, to remind them of the manger. Twelve non-dairy dishes are prepared, in remembrance of the 12 apostles with 12 small courses of different fish: herring, smelt, smoked salmon and eel, or whatever can be found each year. Dinner begins when everyone has gone outside to see if the first star of the evening has appeared. Then the veladorias are lit, a southern California tradition, which are candles in paper bags with sand in them, lining the walk- way to symbolize a way to the Mazeika home for the Three Kings. They sit by the Christmas tree and read about the birth of Jesus from the Bible in Matthew or Luke. They then take an unleavened, blessed, wafer made in Lithuania, and say a family prayer holding hands in a circle. The oldest family member breaks the wafer in half with the next oldest member. They hug and kiss, eat the wafer and give each other a personal greeting for a Merry Christmas or whatever else they want to share. “Linksmu Laledu!~Kaledos = Christmas in Lithuanian. They begin dinner, then open gifts from one another. Some years they play traditional games, taking straws out from under the tablecloth. The longest straw means a long and prosperous life, the shortest bodes problems and means “enjoy it all while you can!”
The Mazeika’s have a son at West Point who plays football on the Army team. The family also puts together special holiday “Boodle Boxes” for West Point Cadets and US soldiers overseas. If you would like to contribute, the deadline is mid-November. The Mazieka’s can be reached at 949-836-4719.
Whatever your traditions, the Journal staff wishes you all Happy Holidays! b
People family