by Bill Koelzer
Michael Vandenburg, local financial consultant.What if you could find a wealth manager right here in San Clemente who had been wildly successful working with some of the wealthiest families in America at one of the largest financial firms in the world? Wouldn’t you feel comfortable with that person?
Well, Michael Vandenburg, CFP®, 37, owner of Coast Wealth Management, Inc., 302 N. El Camino Real, fits that profile perfectly.
For more than nine years he was a rising star investment professional at Charles Schwab in Seattle, WA, Ft. Lauderdale, FL, and Newport Beach, CA. They even let him build his own elite, high-end boutique office - managing nearly a billion dollars - to run inside Schwab. Prior to Schwab, Michael worked in portfolio management at the mutual fund division of San Diego Trust & Savings Bank. His experience spans over 15 years in the industry.
Leaving Schwab was a tough decision, but the timing for Vandenburg was good. He felt gratified because of his in-house boutique’s growth and its acceptance by investors, plus he was feeling ready to venture out on his own. 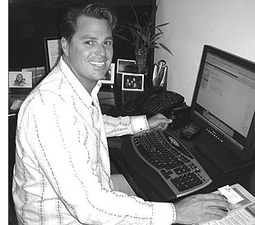 Michael graduated from Point Loma Nazarene University as a business major in 1992. He met his wife, Janet, there, and even though their life for ten years was one of 100-hour workweeks and ships passing in the night, they began their family, which now includes three girls and a boy.
“There’s nothing so important as your family,” says Vandenburg. “Even in investing, family concerns should always come first when setting the tradeoffs that can increase or diminish wealth.”
Now Michael operates his full service, one-man consulting firm in San Clemente, catering to a small group of varied clients loosely falling into two groups.
Emerging Affluent: Vandenburg explains, “These are small business owners or professionals committed to saving towards a goal. For them, most of what I do is investment management, always making sure that their tax and investment portfolios are in line for building wealth that is consistent with their long-term goals.
Affluent: “These people need more wealth management per se,” Michael illustrates. “They’ve ‘gotten there’ and just want to maintain or grow their funds to support a current lifestyle, transfer wealth to children or grandchildren, or conduct educational planning for them.”
The Vandenburg family in Hawaii.But in general, Vandenburg elaborates, “I consult in whatever area the client needs help. Risk management consulting comes into play--making sure that any risks taken stay consistent with the goals that the client has agreed upon. Goals and values go hand in hand. I find out who is important to the client in terms of relationships. I find out what really matters to the client in terms of comfort and lifestyle, because a good degree of building wealth has to do with delayed gratification and choosing tradeoffs.”
Financial consulting is a very personal business, Michael says. “At the start, we discuss almost every aspect of the client’s life. Take retirement. Used to be the job defined you, but now you are much freer to do the job that you want to do. Many of my clients are in their second or third careers. They look at retirement not as the end of working, but as the start of the next stage of their life.”
“We set milestones,” Vandenburg remarks. “Then, as time goes on, if the client gets a little ahead or a little behind, we adjust the program to stay consistent with the goals we’ve set. Milestones are simply checkpoints on the way to achieving goals.
“We also look closely at relationships. Who’s important in the client’s life? Is it a certain relative? A charity or school? If so, we might set up a charitable remainder trust to benefit a non-profit group while also preserving wealth for descendents. But we do not radically shift portfolios to match trends.
Michael relies on full input. “Working closely with a client’s attorney and accountant is also important in making sure that estate plans are implemented properly.”
His services are relatively inexpensive, too. “I don’t sell anything myself, such as stock brokers do. Client assets are held at Fidelity, and the trades that we do make are done through Fidelity’s institutional advisor group.
Instead, Vandenburg charges a fee for his services, just like an attorney does. Also, just as with an attorney, he is discreet. “Everything we discuss here is private and never revealed to others.”
Michael knows that he cannot do everything himself and thus maintains a cadre of the best professional experts in many different fields that he can rely on for help at any time.
When Vandenburg left Schwab, he and Janet took about two years off to travel with their family and to wind down. Now, the 100-hour workweeks are history. In fact, Mike even found time to coach his daughter’s soccer team last year, and his son’s soccer team this year. He is also active in the Indian Princess program for his daughters.
Michael says that sometimes people who manage their own finances become victims of their own success. They leave no time to smell the roses. “Not me,” he affirms. “I did that once. And I learned that managing your time and money in order to spend much of it with a close family is the greatest wealth that you can ever hope for.” b
Arts business news