Escape to Bali - An Unusual Paradise by Anne Batty
Temple Entrance    Soft sea breezes, gently swaying palms, beautiful beaches and warm, multihued turquoise waters … an island is an island is an island. Yet while most islands boast the same general amenities each possesses its own unique characteristics, and the Indonesian isle of Bali is certainly no exception. 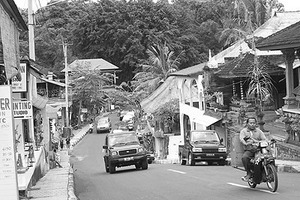 Upon alighting from a long plane ride, wending their way through customs and finally exiting the terminal, this islet’s intense tropical heat engulfs travelers like the steam from a heated Jacuzzi. Once outside, visitors will encounter Balinese drivers lining the street holding cards scribing tourists’ names, while juggling for position alongside taxi operators enthusiastically beckoning those who have arrived on their own. And all the while these eager chauffeurs are calling out in unison, gesturing and summoning to gain travelers’ attention.
When the prescribed mode of transportation has finally been chosen and the mayhem exited, visitors may be pleasantly surprised to find an iced towel, a cool bottle of water, a huge grin and a respectful bow awaiting with their ride - setting the tone for a vacation not soon to be forgotten.
Those used to orderly motoring may find the driving in Bali aggressively chaotic, and while traveling to accommodations through the over-crowded, vehicle-filled streets, one incredible sight will greet the eyes. Entire families can be seen weaving in and out of traffic on tiny motor scooters, with the eldest child standing in front while the father steers and the next child rides behind clutching his waist. Mothers will be seated in the rear, most sitting sidesaddle (as straddling is considered immodest for a woman there), holding the youngest child on their laps.
While a helmet law is definitely in place on the island, many Indonesians violate it … but never the tourists, at least without facing dire consequences. And, in the extreme heat of the day women can be seen riding alone, covered head-to-toe, including gloves, to keep the intense sun from bronzing their bodies. For a Balinese woman, lighter skin is the mark of a higher social class. 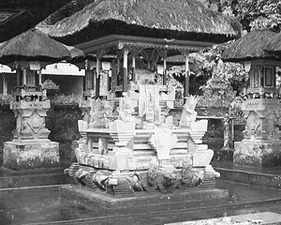 Except for the four-lane main highways found mostly in the coastal and more populated regions, Bali’s streets are extremely narrow, two-lane, roadways winding through colorful villages, terraced rice fields and lush tropical mountain forests. Open air shops and restaurants line most business districts, bearing tropical vegetation, ponds - complete with Koi fish - and waterfalls in abundance. While many villages hold open markets and accommodate islanders with roadside stands and sidewalk vendors.
As is custom in most third world countries, bargaining for goods is a way of life in Bali, even a game, in which the childlike Indonesians indulge with humor and enjoyment. The village market places, roadway merchant’s stalls and sidewalk vendors offer travelers the greatest deals, while the more upscale air-conditioned shops bargain less, standing their ground at limited discount prices.
Temple Alter     Religion, a unique blend of Hindu, Buddhist, Javanese and ancient indigenous beliefs, is an integral part of daily Balinese life, and beautifully hand-crafted offerings (canang) are placed outside homes and businesses three times each day to appease their gods. When encountering these small, laboriously cut and plaited palm boxes (jejaitan), filled with flowers, betel (an east Indian pepper plant), tiny sculptured rice flower cookies (jajan) and burning incense, it is expected that tourists will respectfully meander around them. 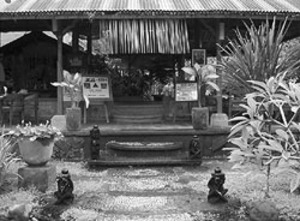 Another way the Balinese appease their gods is by holding festivals and ceremonies, and they are conducted regularly in the over 100,000 temples to be found on the island. During these celebratory times, villagers construct elaborate palm decorations to be placed in front of their homes. The women don ceremonial dress – elegant multi-colored lace blouses and colorful sarongs – and bear huge, beautifully arranged pyramids of food, fruit and flowers atop their heads to be set upon the temples’ high altars. The men also wear ceremonial sarongs, and traditional dances and music are performed, inviting the gods to come down and join in the festivities.
Tourists will find dining in Bali a treat to the palate. While there are many restaurant choices and styles available, the majority are simple, relaxed eateries offering open-air dining in a tropical setting. Even simpler and more rustic are the outdoor cafes called warungs, found mostly along the beaches and near popular surf spots. These, as well as snack shacks, roadside stands and mobile carts, cater mainly to the locals, surfers and those travelers adventurous enough to have discovered that low cost meals really can be safe to eat.
Almost every restaurant on the island will serve nasi goreng (Indonesian fried rice with a fried egg on top) and mie goreng (fried noodles with egg). These basic dishes are generally the favorites amongst tourists. But another Indonesian delight is satay (spicy marinated thinly sliced meat, threaded onto a skewer, barbecued, and served with a spicy peanut sauce). Satay ayam is chicken served in the same way, and gado gado is an Indonesian salad, served with a spicy peanut sauce. A no-strings-attached service is graciously provided in all establishments with tipping being uncommon and unexpected, and at the end of the meal female tourists may find themselves pleasantly presented with a handmade paper flower.
Open-Air Restaurant in Nuhkuning Village, Bali     To “spa” in Bali is a delightful experience both physically and monetarily. Whether provided in hotels, private facilities or on the beach, each treatment offers age-old methods using recipes handed down through generations of beauty therapists. Many of the plant extracts available in these treatments come from locally sourced flowers, roots and barks such as; Jepun (frangipani), Jahe (ginger), Cendana (sandalwood), Kelapa (coconut) and even Bali Kopi (Balinese coffee grains). Thermal/marine water therapy, aroma therapy and herbal therapy are immense there, and known to reduce stress and offer relief from muscular tension. These practices are also said to cure joint disorders, assist in detoxifying and exfoliating the skin and even to re-mineralize deficient skin cells. At the end of each treatment, refreshments await patrons, and the most painless part of the encounter is paying a bill at least 1/5th the cost one might expect to pay elsewhere in the world.
Perhaps the most charming thing about the island, however, is the Balinese people themselves. In spite of their country’s obvious poverty they wear happy grins, and are consistently courteous and gracious. Their curiosity of travelers is boundless, and though their personal questioning can sometimes be annoying, their genuine childlike interest makes it understandable. Theft is almost unheard of on the island and tourists have little fear of being cheated or harmed while visiting there.
Like the foretold lion and the lamb, east and west bed down together in Bali. Western giants like Kentucky Fried Chicken, McDonalds, Burger King, Mercedes Benz, Fed Ex and other major first world businesses and hotel chains have planted roots there. Foreigners from many countries are leasing and buying up land to build large housing complexes, and Gallerias featuring the latest in worldwide fashions and goods, are sprouting up in the more populated areas. In contrast, Balinese natives can still be found fishing the seas in the ancient ways, tilling rice fields using rustic, handmade implements and antiquated methods, and transporting themselves and their goods barefoot, on bicycles, via oxen and horse-drawn carts.
Business District, Ubud, Bali     While Bali presently remains an unusually affordable paradise, it is the consensus among many ex-pats living there that it won’t be long before development and western ways completely engulf the island, changing the mode and cost of living and vacationing there. In the meantime the beauty and ambiance of Bali still beckons. Offering travelers an escape to a place unlike any other, one they will relish, remember and want to return to. b
For trips to Bali:
www.sayangholiays.com
Travel, Places travel