photos by Don Kindred
“…In the good old clipper ship days.
Then men loved ships like women
And going to sea was more
Than signing on as a deckhand
And scrubbing a cabin floor,
Or chipping rust from iron
And painting, and chipping again –
In the days of clipper sailing
The sea was the place of men…”
Harry Kemp, Cassell’s Magazine, 1940s
They’re coming! The Tall Ships! The brig Pilgrim, the Spirit of Dana Point, the Exy Johnson, the Argus, the Lynx, the Bill of Rights, the Californian, and the Royaliste. The sailing vessels will round the Dana Point Headlands seeking their weekend berths in the Dana Point Marina on Friday, September 9, when the Ocean Institute celebrates its 21st Toshiba Tallships Festival. 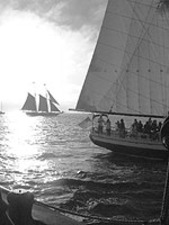 What’re tall ships ye ask? They’re seagoing vessels with masts and yards or sails. They’ve traded and explored, carried passengers, chased whales and escaped pirates over the great distances of the world – the seven seas. Most had three or more masts, square-rigged on all – the barque, barkentine, and brig; the brigantine, ketch, and schooner had two masts. Their ancestors were the small, clumsy, man-moved boats rowed first by primitive peoples. Later, the Romans added sails. The Vikings perfected them. Next came the Spaniards and Columbus and their maneuverable long-range craft powered by triangular lateen sails. With the armadas of Spain, Britain and America, bigger hulls and more and more sail and richly decorated and gilded galleons began to appear - built first of wood, eventually of iron and steel, carrying guns for attacking or self-defense - boasting at least three masts with square sails. Further advancements brought propulsion progressively by steam, coal, oil, diesel, and now nuclear power.
Today, there are still many sailing enthusiasts - both young and old, male and female – who want to see and smell the ocean, feel the wind on their faces, have the company of other sailing aficionados and experience the thrill of the “snowy canvas set.” For many, there are opportunities to cruise on tall ships or sail on the Barefoot Cruise Windjammers. For others, the closest we can come is the Tall Ships Festival.
The 130-foot Pilgrim, a replica of the ship immortalized in Richard Henry Dana, Jr’s Two Years Before the Mast, leads the flotilla of tall ships into her homeport. She hoists fourteen sails, including eight square sales. The Ocean Institute’s Spirit of Dana Point, a traditionally built replica of a 1770’s American Revolution privateer is a 118 foot sparred schooner with 5,000 feet of sail. She plays the role of an “at-sea learning platform” for school children of all ages with an emphasis on maritime living history and marine science. The Exy Johnson, a 110 foot brigantine built by hundreds of volunteers, is operated by the Los Angeles Maritime Institute to provide sail training to “at risk” youth in Southern California. For over 25 years, the Argus has provided unique sail training experience to Sea Scouts of all ages. A former merchant vessel in Baltic and Scandinavian waters, the Argus originally was a salt fish carrier. A 78-foot schooner model of an 1812 privateer is the Lynx, whose homeport is Newport Beach. The Bill of Rights is a 129- two masted, gaff-rigged topsail schooner. Refit to the specifications of an 18th century dispatch gunboat/bomb ketch, the Royaliste extends to 71 feet. The Californian is a replica of an 1849 cutter, a 145’ foot two masted square topsail schooner sponsored by the San Diego Maritime Museum. . 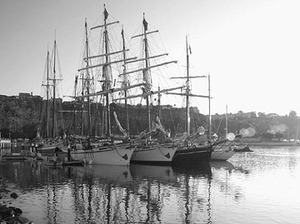 Saturday and Sunday, September 10th and 11th, the Ocean Institute will host the largest annual gathering of tallships on the West Coast, and will present a sensational variety of events and family-fun activities including pirates, live music, art shows, living-history demos and plenty of flavorful grub and grog. There’ll be tours of the fascinating featured players, the ships themselves, led by authentically costumed members of their crews, along with cannon battle cruises. You can “…stride the focsle,” “… walk the plank,” or “…hoist the yardarm.”
Inside the Ocean Institute, there’ll be pirate games, live parrot shows, arts shows and ship models. Also animal tanks, word carving demonstrations, story times, and The Tryal of Anne Bonney & Mary Reed, a short play presented by the Port Royal Privateers.
Entertaining on stage at Baby Beach Grass Park you’ll find Bill Dempsey, Connie Allen, Tom Lewis, When Pigs Fly, Foggy Dew, and a Polynesian dance review. On the docks and surrounding grounds, artists, craftspeople and book sellers will show their wares: food, clothing and gift items will be plentiful. Special activities for children include a pirate encampment reproduction, Native American basket weaving and jewelry making, gold panning, treasure seeking, knot tying and outrageous face painting.
The Grass Park activities, are free to all comers. Admission is required for the tall ship tours and Ocean Institute (members: adults $6, children $3 – non-members: adults $8, children $5) (children 3 & under are free). Admission will also be required for Friday’s Sunset Tall Ships Parade, the Sea Explorer Parade Escort Cruise and Cannon Battle Cruises. Free parking and shuttle service (every 15 minutes) is available at the Salt Creek Beach Park at Pacific Coast Highway and Selva Road and at nearby Dana Hills High School.
Karen Wyman, the Ocean Institute's Public Programs Director, is bursting with enthusiasm about the Festival.
“It’s going to be the most spectacular ever, with additional ships, the pirates, living history engagements, including long boats shanghaiing sailors, new entertainers and musical groups. It’s just going to be huge.”
See ye thar, mateys.b
For questions, call the Ocean Institute at 496-2274 or visit
Community community news