By CeCe Darakjian
Autism is big news. It seems you can’t turn on your television or open your newspaper without finding a story about the disorder. The school board president writes in the local paper about autism’s effect on our schools; the Today Show dedicates a week of segments to examining the disorder; while a book written from the view point of an autistic 15-year-old, The Curious Incident of the Dog in the Night, tops the recent Best Sellers lists. Around the world people are talking about autism, what causes it and what can be done about it. 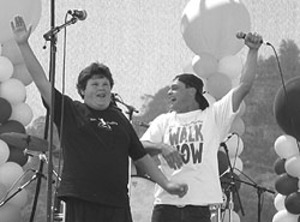 Meanwhile, San Clemente has become the center of a growing movement in the autistic world thanks to a local family and their friends. Their brainchild “Surfer’s Healing,” a free surf camp for autistic children, started out as a one day event at San Onofre Beach and now reaches hundreds of children in places as far away as New York and Hawaii.
Understanding autism can be a daunting task. It is defined as a severe developmental disability affecting the portions of the brain that control communication, social interaction and abstract thought. Because of the broadness of each of these categories no two children with autism appear to be alike. Symptoms may range from mild misunderstanding of social cues to severe inability to communicate or cope with the world around them.
Researchers continue to investigate and debate the exact cause and the appropriate treatment of autism, but the one fact no one is debating is the increase in diagnosis. Most involved in the field regard autism as having reached epidemic proportions and it is estimated that currently one in every 166 children or almost 1.5 million people are diagnosed with this disorder. It knows no racial, economic or national boundaries, although it does affect almost four times as many boys as girls.
For most parents the diagnosis of autism in their young child begins a lifetime of searching. Searching for answers and searching for ways to help. It was just such a search that led Israel and Danielle Paskowitz to the idea of a “Surfer’s Healing” camp.
Israel Paskowitz grew up on the ocean. As a member of the famous Paskowitz surfing clan, led by father Dr. Dorian “Doc” Paskowitz, Israel became a professional long board surfer and traveled the world in search of the perfect wave. Eventually settling down to run the family surf camp, he and wife Danielle (also a local San Clemente girl) knew early on about the “healing powers” of the ocean.
The couple’s first child, a daughter, Ella, was the perfect addition to their young family. Then three years later Danielle gave birth to their first son, Isaiah. At the age of three, the boy was diagnosed with autism. He suffered from many typical autistic symptoms including severe delays in communication and sensory overload. One day after a particularly difficult day with Isaiah, Israel had an idea. He plopped his son on the front of his long board and pushed out into the waves. The ocean worked its magic, calming and soothing Isaiah, and the two continued to catch waves for the rest of the afternoon. From this one joyful experience a movement was born.
The Paskowitz’s first Surfer’s Healing event was held at San Onofre with just a few families with autistic children invited to spend the day so their kids could be exposed to the beach, the ocean and the sport of surfing. It was a major success, with most participants expressing a desire to do it again. And they did … again and again. Today the camps are attended by hundreds of autistic children in over eight different cities, in three different states and in Mexico.
Making sure the surf camps are accessible to all these families is of utmost importance to Israel and Danielle. As parents of an autistic child they are well aware of the prohibitive costs for many autistic therapies. That’s why they decided early on to provide the camps at no cost to the families.
Surfer’s Healing camps are staffed by volunteer surfers ranging from local high school kids to top professionals like Rabbit Kekai and Kelly Slater. Fund raising takes place year-round and includes star-studded events like the party at the Esquire House in Beverly Hills featuring Perry Farrell and the Red Hot Chili Peppers or the recent performance by Sugar Ray at the Venice Cantina. Many local events are also held, like the upcoming party at the Dana Point Marriott Resort and Spa on May 28th. Billed as a “Summer Kickoff” this event is a chance for families of autistic children to come together and forget about disabilities or limitations and just have fun.
If the old African adage “It takes a village to raise a child” is true, families of children with autism are lucky to have the “village” of San Clemente and the Paskowitz family. As the popularity of the camp grows, the job of raising funds and operating the camp on a day to day basis does too. It’s the kids who make that job worth doing.
As camp co-ordinator Jennifer Tracy explained, “When you see the smiles on those kids faces, it doesn’t matter if you’re in New York, Hawaii, Mexico, or right here in San Clemente, those smiles make it all worthwhile.” b
Anyone interested in information about the camp, or who would like to volunteer or donate to the camp please contact the Paskowitz family at www.surfershealing.org.
Community surf scene