By Bill Thomas
A self portrait.    San Clemente is gaining ground in its collective pursuit to become a recognized beacon in the art world. We have several art galleries, restaurants and public buildings displaying paintings and photography, art collectors, school art classes, an active 270 member art association, and, best of all, we have a talented array of artists, whose works are shown in Laguna, Carmel, Taos and other established art colonies. 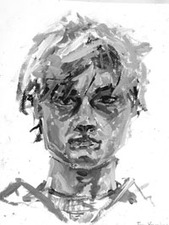 We also start them young. One youth with a strong appreciation for and performance in aesthetics is Joey Varholick, age 15, a tenth grader at San Clemente High School.
In the 2003 and 2004 Paint San Clemente Plein Air Contests, where artists of all ages and years of experience competed, Joey finished fourth in both years. San Clemente Art Gallery director Pam Hill was amazed.
“The judges had no idea of his age. There’s no identification of the artists when the judges make their choices,” she exclaimed.
At a recent exhibit of 40 local high school artists at the Casa Romantica, Joey was represented by two of his recent efforts: “Christ the King” and “Metropolis Asleep.” His first painting of Christ bearing a cross, with his painful crown of thorns, was described as having “…loose brushwork, thoughtful color selection, strong value contrast expressing the pain and suffering of Christ on the road to his crucifixion.” The second was a skyline of high-rise buildings, which could have been New York or Chicago. Joey admitted he had “…just made it up.”
This teenage artist’s primary painting medium is acrylics. His style is impressionistic, with, he says “…a naturalistic kind of bent.” He started painting along with his mother, Cay, at an early age.
“Joey passed me up a few years ago,” Cay admitted. “I stopped seeing the forest for the trees. Joey paints exactly what he sees.” 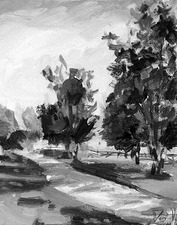 Beyond his painting in school, where his art skill received recognition by the Orange County Department of Education and he was named art student of the year at Bernice Ayers Middle School, Joey has faithfully pursued further art education. He’s been a member of the San Clemente Art Association for three years, and attended the Renaissance School of Art in Laguna Niguel, the San Juan Capistrano Art Conservatory, and Laguna Beach’s Art Institute of Southern California. He’s also studied under prominent professional artist Davy Liu and has applied for the California State Summer School for the Arts for high school students to be held on the CalArts campus in Valencia this summer. As an exhibitor, his work has been displayed at the Laguna Beach Festival of Arts and San Clemente’s Art Gallery.
T-Street    An Eagle Scout, who is taking advanced placement classes at San Clemente High School, Joey enjoys model building and intends to study sculpting. As part of the Eisenhower People to People Ambassador Program, he has traveled to Europe painting and photographing scenes of interest.
Joey’s primary painting activity is in school where he usually takes one to two hours to complete a canvas. He’s tried watercolor and oil, but prefers acrylics, and enjoys landscapes as subjects.
“I just find something I’m interested in: the coast, water, the beach, whatever’s appealing,” he indicates.
Painting also from photos and his own imagination, many of his endeavors have been paid commissions by people who have admired his work and believed in his potential. Joey even has his own website: http://www.varholic.com.
Varholic’s supportive family, along with mother Cay, who monitors his art efforts, includes father Joe, an aerospace careerist, and older brother Erick, a local UPS employee. All applaud Joey’s progress in the art world.
The Simpsons is Varholic’s favorite television show, and the movies he prefers are the Hobbit and comedies. His high school art teacher, highly acclaimed local artist, Rick Delanty, a devoted advocate for the promotion of young artists in this City, considers Joey a fine example of the young talent being developed here.
“Joey is very creative. He builds his own compositions; he’s good with structures and has a good command of perspective, color, and lighting. He works well in implying the illusion of form and light source. His pictures tell stories and he has lots of potential.”
Delanty considers Joey a fine representative for the untapped source of artists developing in the public school wellspring of creativity.
In an email, San Clemente Art Association’s CEO, George Gooch commented, “I think Joey Varholick is one of the shining starts who will just keep getting brighter as he grows. He competes with all master artists and fares well. His potential is limitless. With his demeanor, talent, and family fan club, he is truly one to watch.”b
Talega
Arts art scene