The Russians of Guadalupe Valley 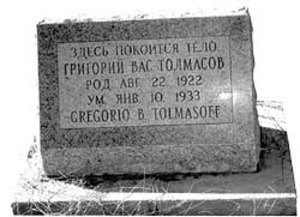 Most of Baja’s wineries, including Santo Tomas, L.A. Cetto, Domencq, Mogor-Baden and Monte Xanic, are in the fertile Guadalupe Valley some 20 miles or so northeast of Ensenada on Highway 3. Rather than backtrack from Ensenada we took the graded road off the old (libre) Highway 1, about 12 miles south of La Mision.
I’d driven the road several times before and continually delight in the trim ranches, fertile farms, numerous orchards with straight rows of peach, apricot and olive trees, the knurled stumps of the vineyards and the bright multi-hued flower fields along the way. While I’d heard of the Russians who had settled there, I was usually searching for something else, like this trip’s wineries. Other times it was the route of the gold miners who went through here in the 1870s and 1880s, or the old mission (Baja’s last, established in 1834).
In fact the mission was referred to as the peninsula’s most prosperous and powerful with over 400 Indians, 4,915 head of cattle and fertile fields fed by an intricate irrigation system. But it had the shortest life of all as in 1840, the leader of the Kumiai Indians Jatnil didn’t like the forced conversion of his people and led a successful revolt against the mission, chasing the padres out of the valley. It is said that Padre Felix Caballero fled leaving most of the mission’s livestock.
Plentiful water in an attractive valley
The Kumiai Indians who had been in the area for thousands of years found the plentiful water and the flora and fauna dependent upon the water to their liking. They called the place Oja Cunurr, or Painted Caves, alluding to some crude rock art found in nearby rock outcroppings. The paintings have since been destroyed, but the rich, fertile rolling hills dappled by mountain oaks make the valley attractive to all who came through it. Russian Cemetary in Guadalupe Valley features markers in Cyrillic script. 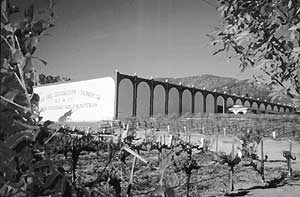 This time we too fell under the valley’s spell and decided to make it a leisurely day. That’s when we saw the sign “Museo Comunitario ‘Valle de Guadalupe’ Tel: (615) 5-20-30” nailed to a huge eucalyptus tree in front of a white block house with a steep roof that looked incongruous in the Baja sunshine.
We entered to discover an Old World heritage proudly displayed in a New World setting. We were enthralled by the old photos and Russian artifacts and enraptured by the charm of our hostess Francisca Samarin, herself a descendent of a colony of Molokan (milk-drinking) Russians who settled here a long time ago.
The curious settlement started a century ago in Kars, Russia (now Turkey) where a religious group which called themselves Molokans (milk drinkers) split from the official church of Russia at the time, the Eastern or Greek Orthodox Christians. The Molokans followed strictly what they considered the laws of Moses and abstained from pork, tobacco and alcohol. They interpreted the term “spiritual milk” noted in the Bible to mean they should receive much of their nourishment from milk and dairy products.
Pacifists in a country at war
It was not their diet but their conviction as conscientious objectors that got them into trouble with Czar Nicholas II. The pacifist Molokans refused to serve in the military and with a war going on, they found it prudent to seek a mellower climate.
So they moved to California, most settling around Los Angeles. This rural group, however, found a big city environment a little difficult for raising crops and had to look elsewhere.
Their prayers were answered in 1905 as Mexican President Porfirio Diaz agreed to sell the sect 13,000 acres of fertile land in Baja California’s Guadalupe Valley.
Other ranchers had already arrived in the valley and the fledgling viniculture of the area had already begun, along with cattle ranching and other farming.
The 105 families of Russian settlers (about 500 total) laid out their town the way they had at home, equal partitioned lots along a broad tree-covered avenue. Their whitewashed adobe and wood homes with steep-pitched wooden (some thatched) roofs had front doors that faced away from the street.
They set about planting grains and vegetables, olives and grapes and raised gaggles of geese and bees for honey. Their homes had basements to store their jams, preserves and honey. They baked an excellent Russian bread and drank tea or “chai” made in the samovar. Their main dish was Borscht, which they cooked with wooden spoons.
The Molokans worked hard and prayed hard. They dressed simply with women covering their heads with homemade “kosinkas” or shawls, and the bearded men wore high-collared shirts called “rubajas” which had drawstrings around the waist.
Citizens of Mexico
They became splendid citizens of Mexico and while they spoke Russian in church and at home, were ever loyal to their adopted country. It is said that Russian-born Mary Rogoff , while she had only a third grade education, delivered over 1,000 babies to the women of the valley.
Molokan Russian Decendent      In 1938 the popular Mexican President Cardenas designated lands for the peasants of Mexico. Guadalupe was engulfed by 3,000 Mexicans and the town was renamed Francisco Zarco. Many Russians left at that time. Others stayed and over time have assimilated into the culture.
According to Francisca Samarin, “Today there are only 20 pure Russians left in the Guadalupe Valley, but…” she added with a grin, “There are about 240 of us with mixed blood.”
The museum consists of a couple of rooms and while Senora Samarin was showing us around, some light haired, light-eyed children played at her feet.
Around back of the museum was a special room, the sauna. Like the many others in the community, it was a small room with heated stones in a platform in one corner onto which they poured water getting the stones red hot and the bodies to perspire like they’d entered the gates of hell.
Construction was going on in one room. “This we hope to turn into a restaurant,” she said. “We want to serve traditional Russian food like our ancestors used to make.’
That sounded good to us and we plan to check it out next visit. After we left we drove over to the Old Russian cemetery, where headstones inscribed in Cyrillic script attest to the legend of the Russian colony of milk drinkers that found their peace so far away from home.
That the area is surrounded by Mexico’s top wineries now is further proof that Baja has something for everyone. b
(c, a regular contributor to the San Clemente Journal, is the author of “Baja Fever,” and “Baja Legends,” from which this article is excerpted. Both are available in bookstores and on the Internet.)
Community the baja beat