ART AND MUSIC – Ancient Venues Renewed in the Contemporary Church by Anne Batty
photos by Bill Goodrich
An artist’s canvas stands void of color in the dimly lit sanctuary of Capo Beach Calvary Chapel, in south Orange County ... at its feet a rainbow palette of paints. And poised sentry-like surrounding it, a bevy of microphones, music stands and musical instruments stand silently waiting. 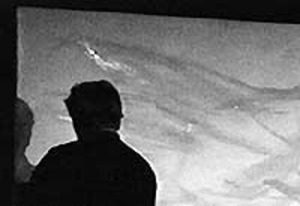 From blank canvas..    Soon a worship team appears. Their music calls the congregation to vocalized prayer, and as the melody and congregates’ voices blend, filling the church with praise, an artist unobtrusively takes his place in front of the unadorned piece.
His first brush strokes upon the canvas make no sense. Then there is another and another. Eventually form emerges and at the end of worship an inspirational portraiture appears. Thus a modern venue for spiritual expression and inspiration - art in partnership with music – has been created. And though unique in its approach, this innovative partnering finds root in the creative and inspirational expression found in the earliest Christian churches many years ago.
THE ART AND CHURCH CONNECTION
According to historians Christian art emerged after the death of Christ, when depictions of Biblical scenes and persons in the form of frescoes and sculptures were painted and carved onto and into the walls of the Roman catacombs. From that venue, art in the form of colorful mosaics moved into the oratories (private chapels) and other places of worship within the primitive church. Then during the Byzantine period there arose a spirit of devotion, a pursuit of good works and a retribution for sin, that gave instinct to decorating houses of worship with the very finest works man was capable of.
From blank canvas..     Due to the suspicion and persecution of those in the early church, however, this art was privy only to a small audience, and it wasn’t until the Renaissance, that great era of transition from the Middle Ages to modern times, that ecclesiastical art was made more publicly available. 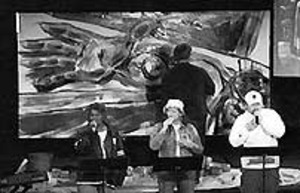 During that time, church art began appearing on the walls, ceilings and altars of the Roman Catholic Church, in the form of frescoes, portable pictures and stone statues. And the artists of those times engaged in their task with the determination that only the best creative craftsmanship should be devoted to the service of the church.
Then in England towards the middle of the 19th century, the “Oxford Movement” adopted that same determination that the house of worship should be beautiful, and handicrafts in the form of tapestries and stained glass renderings joined the religious adornment already finding its way into the Protestant churches.
These were the beginnings of the art and church connection, and that connection flourishes in varying forms in places of worship today.
PRAISE MELODIES PLAY THEIR PART
Musical authorities are united in tracing the history of church music back to the cantillations of the synagogue. The singing in the synagogue was psalm singing and research indicates that the early Christian church sang their praises in much the same way.
As time passed, a debate arose about the desirability of using instrumental accompaniment in worship. The arguments in favor were rejected, and for the first thousand years or so, the music composed for the early churches was sung instrumentally unaccompanied. And since musical notation as we know it today was not invented until the 11th century, these melodies were handed down, not written down.
The Psalm singing and chanting of those early years were the embryo from which the whole of Western church music finally grew, but until very late in the Middle Ages congregational singing was virtually unknown. For example, the music appropriate to the Roman Catholic Mass was sung by a canter and a choir and only heard, not participated in, by the lay worshippers.
During the Reformation, Martin Luther influenced the creation of a more formal type of worship music, and instrumentation and the full participation of the congregation was introduced. But it wasn’t until 1753 that the most fervent interest in congregational singing in the church came to be, and from that period on church members fully participated in the songs of praise.
In the 18th century religious music expanded beyond all bounds, borrowing common melodies, sometimes those of secular/popular songs, and rewriting religious words to fit them. During this period hymns, anthems and choruses became popular for congregational singing in both Catholic and Protestant churches
The 19th and 20th century introduced a freedom of style in what history calls the “Liturgical Movement,” a movement whereby religious music underwent a transformation to suit the changing and evolving congregations. For example, Vatican II changed the face of worship in the Roman Catholic Church and those changes triggered the translation of church hymns into a less formal, folk guitar venue.
These evolving musical worship forms opened the door to the continual creative changes in the writing, instrumentation and presentation of a style of music that is breathing new life into the religious services in contemporary churches today.
...to finished portrait.ART, MUSIC AND THE
CONTEMPORARY CHURCH
Falling back on the ancient belief that places of worship should host the very finest of which man is capable, many present-day churches are offering a venue whereby Christian artisans can lend their varying talents to the service of the church.
This venue is encouraged at Capo Beach Calvary Chapel, and it has offered many professional artists and musicians opportunity to grace church halls, walls and sanctuary with spiritual renderings and musical praises.
Displaying works from traditional to abstract, CBC members and artists Ray Friesz, Tom Clark, Roger and Miriam Tait, Patty Terry, Brett Rubbilo, Glenn Massey and Robin Hanley use their artistic abilities to enhance services and inspire congregates. While professional musicians like keyboarders, Phil Christenson (Maranatha Music San Clemente), Ron Pedly (with Barry Manilow), and Peggy Desquane (organist for Edison Field and the Pond in Anaheim), and guitarist, Mark Seal (music teacher and recording artist), lend their talents to writing and playing musical praises that honor their beliefs and encourage others.
Under the leadership, guidance and openness to new ideas modeled by CBC Pastor Chuck Smith, Jr., these artists and musicians are partnering their talents to create innovative new ways to encourage spiritual growth in an ever-changing world. The painting of inspirational art to the accompaniment of worship music during services is just one of the many ways these craftsmen are aspiring to preserve and communicate the message of the Christian church.
From the etchings of the earliest believers on the walls of the Roman catacombs, to the canvas in the sanctuary of a modern day church, spiritual inspiration appears to be flourishing in contemporary worship today. With moving music being added to the mix, this latest inspirational innovation may one day be considered one of the finest spiritual contributions man has ever been capable of offering. b
Arts family