Surf Spots - The Best of the Best by Christiaan Sorensen
As a surfer and a writer, when I saw that my assignment was to write about the top five international surf spots, I did a few cartwheels and a handstand. Top five surf spots? Easy money, baby!

However, after some careful consideration, I found that listing the top five surf spots is like listing your top five family members. No matter how you do it, you’re bound to leave something/someone off the list.
Since this assignment was all mine from the get-go, I decided to take some criteria into consideration.
Top priority went to locale. For example, a top spot is not only consistent, but fairly safe to surf (i.e.,travel wise, as well as in the water).
Next came the type of wave. Fortunately, I know better than to fool myself into thinking that I am a big wave charger, so my top five will be heavy with consistent, hollow waves, usually in the 4-8 foot range, maybe holding on a 5-10 foot swell. (Not that you’d find me out in those conditions.)
Finally, the final criteria that I decided to employ is the crowd factor. I can paddle out at Lowers, down in Trestles, one of the best breaks in the world, any day of the week. However, fighting 30 guys for a mushy right-handed roller doesn’t do it for me, so making the cut are surf spots that call 4 guys out crowded. So, without further ado,(drum roll please), here’s Christiaan’s (the Journals?) TOP
5 INTERNATIONAL SURF SPOTS, in order from 5-1.
Number 5:
Jeffrey’s Bay,
South Africa 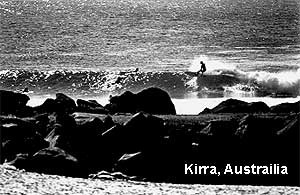