The San Clemente Historical Society – Saving the Past for the Future by Anne Batty
Life in the present, and all its yesterdays, becomes tomorrow’s history. That history can only be reserved, protected and recorded by people who care fervently about something of value. Those who care and do something about it are special.
The Spanish Village-by-the-Sea, has a history well worth preserving, and the town has been fortunate enough to inhabit a group of people who not only care, but also have logged thousands of volunteer hours to prove it. 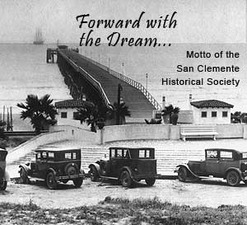