by Anne Batty
Red hats, decoratively banded, wide-brimmed, feather enhanced, flower bedecked red hats. Purple ensembles, satin gloves, feathered boas, boots and tennis shoes. Glimpses seen out and about the Spanish Village by the Sea, at the Pier, in restaurants and tearooms. Outrageous? Maybe. But members of the Red Hat Society don’t seem to think so.
This group of ladies has decided to meet middle age head on, believing that there is definitely fun after 50, and that silliness brings comedic relief to life’s later years. After all …what could be sillier than wearing red hats and purple attire out in public? 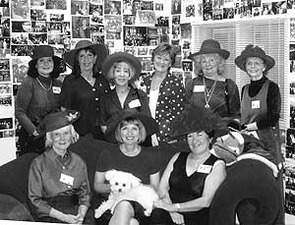 Sue Ellen Cooper exalted Queen Mother of RHS with Sue Louise Duggan, Queen Mother of the Sassy Ladies
At the root of it all is the poem “Warning” (sometimes known as, “When I Am An Old Woman”) written by Jenny Joseph. In this work, Joseph gives fair warning that she intends to do as she pleases in her maturing years, “… wearing purple and a red hat which doesn’t go and doesn’t suit me … sitting down on the pavement when I’m tired … and going out in my slippers in the rain…”
This was the prose that inspired, Sue Ellen Cooper, of Fullerton, CA, to gift a good friend’s BIG BIRTHDAY with a vintage red hat and specially framed copy of this poem. Her friend enjoyed the present so much, Cooper continued gifting other friends’ milestone birthdays in the same manner. One day it occurred to them all that they were becoming a sort of “Red Hat Society” and it was decided they should go out to tea in full regalia. The tea was a smashing success, the group’s numbers swelled to 18, and the society was born.
Since18 women don’t fit too well around a tea table, however, it wasn’t long before this group opted to encourage other interested women to start their own chapters. One of the original members passed along the idea to a friend in Florida, and the first “sibling” group emerged. From those humble beginnings Red Hat Societies, fondly referred to as “disorganizations”, have spread all over the United States, Canada, England, Australia, New Zealand and Mexico
Rita Hirsch (front left) founder of San Clemente's Sweet Peas pictured with her group and exalted Queen Mother of RHS.
“Queen Mother” is the title Sue Ellen Cooper gave herself, tongue in cheek, when she and her friends started that first chapter. Others in the group were entitled: “Vice Mother”, the Queen Mother’s right-hand woman and the mother of vices, so to speak; “Anti-parliamentarian”, the one who enforces the rule that there are no rules; “Barristress”, for the lawyer in the group; “Mistress of Anxiety”, the one who worries about other members’ problems for them so they don’t have to; and so it goes. It is also told that a woman in another chapter elected herself president – of herself – and then rejoiced in the fact that she still couldn’t control herself! All evidence that the sillier and grander the title incurred, the more fun the group is having.
Although red hatters have no rules per se, they strongly suggest that all groups formed wear a red hat and clashing purple clothing to all meetings, keeping up the spirit and purpose of the (dis) organization. It is also their hope that women under 50 will wear pink hats and lavender ensembles until THE BIG BIRTHDAY, adding an element of fun to aging, making it something to anticipate, rather than something to dread.
But the main responsibility of these groups is to have fun! To say goodbye to burdensome responsibilities, as loudly resounded in the Red Hat Society theme song, “All my life I’ve done for you. Now it’s my turn to do for me,” composed by songwriter Mike Harline.
Groups of these fun-loving red hatters have been spotted this year enjoying tea in town on Avenida Del Mar at the Posh Peasant. The Internet lists four chapters in San Clemente, the Sassy Lassies, the Satin Dolls, the Sweet Peas and the Beach Town Dollies.
THE SASSY LASSIES 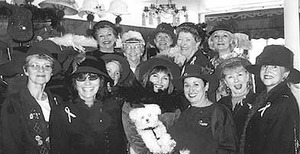 Sue Duggan, Queen Mother of the village’s Sassy Lassies, says her members love playing dress-up. “Nothing is too outrageous,” she reveals. “Rhinestones, feathered boas and red satin gloves all go perfectly with red Reeboks and purple socks. At every luncheon we have “show and tell” for any new red or purple items we have acquired. If the item came from a thrift store, we applaud wildly.”
According to Duggan, the original five member Sassy Lassies’ first luncheon at Sarducci’s caused quite a stir. Tourists at the restaurant were clamoring to take their pictures. These Lassies were having such a good time together they began inviting other friends to join them, and at last count they are eighteen strong, ranging in age from 55 to 90 years old. “Our 90-year-old member can run circles around the rest of us!” Duggan quips.
THE SWEET PEASHE SWEET PEAS
Queen Mother, Rita Hirsh, decided to start a chapter of red hatters after reading an article about the society in the newspaper. “Our group started with five women and we now number 15,” Hirsh said. “We love the strength we get from our shared experiences. One of our members, an author, acknowledged the group in her new book, Finding Me in a Paper Bag, for having been given the opportunity to find out what friendship among women does for the soul.”
According to Hirsh this is a lively group, enjoying pot lucks, teas, a visit to the Nixon library, the design district in Solano Beach and celebrating Christmas at the Ritz Garden and Restaurant in Newport Beach. “With our red hats in place, we leave our homes for our monthly event in excited anticipation, knowing we will always walk away renewed,” she said.
Betty Johnson's Satin Dolls smilingly share an afternoon outing
with exalted Queen Mother and her dog, Frosty.
THE SATIN DOLLS
“Leave your baggage at home, join us and let’s party.” That’s the motto of the San Clemente Satin Dolls. One of the largest groups going, these hatters boast 30 members aged 50-90.
Coming from a marketing and sales background, Queen Mother Betty Johnson set out to form a group of people who were strangers to each other, with no former ties. The result is a very diverse band of women who come from all walks of life and a myriad of experiences.
“We are a pretty organized (dis) organization,” she says with enthusiasm. “We have a calendar of events and everyone chips in to do their part. Programmed fun nights, train rides, lunches, teas and attendance at community events, are just a few of the things on our agenda.”
It’s apparent a positive new women’s movement is pervading, not only the village, but also the society at large. With silliness and fun, Red Hatters are proving that there is definitely fun to be had after 50. And underneath all their frivolity is growing a bond of affection, forged by common life experiences and a genuine expectation for what life will bring them in its next phases.
For more information check out www.redhatsociety.com.
Community, People, Arts community news